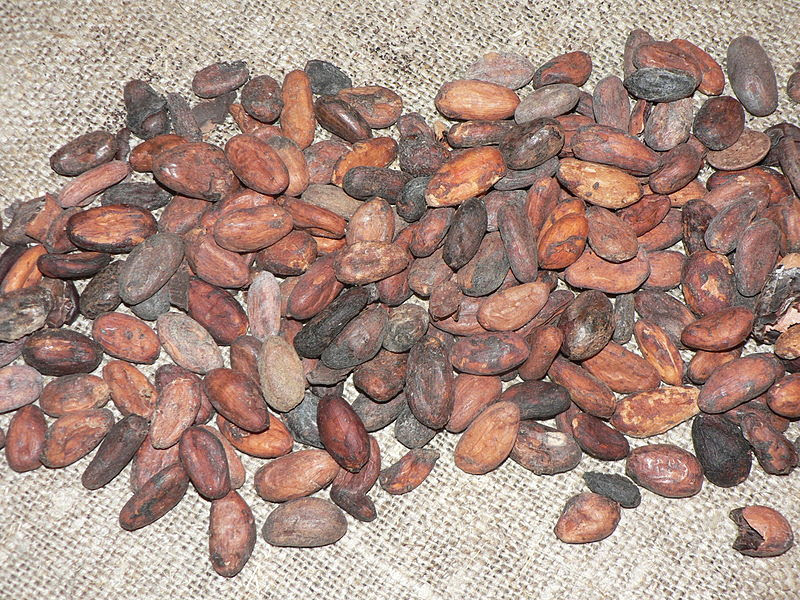 Image: Wikipedia
That's among the discoveries emerging from an effort to identify the essential aroma and taste ingredients in the world's favorite treat, described here today at the 242nd National Meeting & Exposition of the American Chemical Society (ACS). The research, which chronicles flavor substances from processing of cocoa beans to melting in the mouth, could lead to a new genre of "designer chocolates" with never-before-experienced tastes and aromas, according to Peter Schieberle, Ph.D.

"To develop better chocolate, you need to know the chemistry behind the aroma and taste substances in cocoa and other ingredients," said Schieberle. A pioneer in revealing those secrets, Schieberle received the 2011 ACS Award for the Advancement of Application of Agricultural and Food Chemistry at the meeting. "That understanding must begin with the flavor substances in the raw cocoa bean, extend through all the processing steps and continue as the consumer eats the chocolate.

"When you put chocolate in your mouth, a chemical reaction happens," explained Schieberle. "Some people just bite and swallow chocolate. If you do that, the reaction doesn't have time to happen, and you lose a lot of flavor."

Chocolate is made from cacao (or cocoa) beans, the seeds of cacao trees. Raw cocoa beans have an intense, bitter taste and must be processed to bring out their characteristic flavor. Processing starts with fermentation, in which the moist seeds sit for days in baskets covered with banana leaves while yeasts and bacteria grow on the beans and alter their nature. The beans are dried in the sun and then roasted. Much of the chocolate used in baking, ice cream and hot cocoa undergoes "Dutch processing," which gives it a milder taste. Worldwide, about 3 million tons of cocoa are produced each year.

Cocoa production developed over the years by trial and error, not by scientific analysis, so the substances that give chocolate its subtle flavors were largely unknown, said Schieberle. He is a professor at the Institute for Food Chemistry at the Technical University of Munich, Germany. Over the past 20 years, his team has uncovered many secrets of chocolate's allure.

The distinctive chocolate flavor evolves throughout its production. Odorless, tasteless "precursors" form during fermentation, and these precursors react during roasting to form taste and aroma compounds. The flavors of chocolate and other foods come not just from taste buds in the mouth, Schieberle noted. Odor receptors in the nose play an important role in the perception of aroma. Schieberle and colleagues identified various substances present in cocoa for aromas that bind to human odor receptors in the nose. They mimicked the overall chocolate flavor in so-called "recombinates" containing those ingredients, and taste testers couldn't tell the difference when they sampled some of those concoctions. Individually, those substances had aromas of potato chips, peaches, cooked meat and other un-chocolatey foods.

"To make a very good cocoa aroma, you need only 25 of the nearly 600 volatile compounds present in the beans," said Schieberle. "We call this type of large-scale sensory study 'sensomics.'" Sensomics involves compiling a profile of the key chemical players responsible for giving specific foods their distinctive taste and aroma.

Because no individual compound was identified bearing the typical aroma of cocoa, the researchers had to pick apart individual aromas and put them back together for taste testers to experience. This is a crucial step toward determining how aroma substances work together to stimulate human odor and taste receptors to finally generate the overall perception of chocolate in the brain.

Some of Schieberle's research also uncovered a way to improve the taste of chocolate. The group found that by adding a little bit of sugar to the cocoa before Dutch processing, the chocolate becomes even milder and more velvety due to the formation of previously unknown taste components.

Schieberle's data could help manufacturers control and improve the flavor of cocoa products by assessing these key components in their mixtures.
Contacts and sources:
Michael Bernstein
American Chemical Society
on August 29, 2011