Thanks to advances in experimental design, physicists at the National Institute of Standards and Technology (NIST) have achieved a record-low probability of error in quantum information processing with a single quantum bit (qubit)—the first published error rate small enough to meet theoretical requirements for building viable quantum computers.
Micrograph of NIST ion trap with red dot indicating where a beryllium ion hovers above the chip. The horizontal and vertical lines separate gold electrodes, which are tuned to hold the ion and generate microwave pulses to manipulate it. The chip was used in experiments demonstrating record-low error rates in quantum information processing with a single quantum bit. 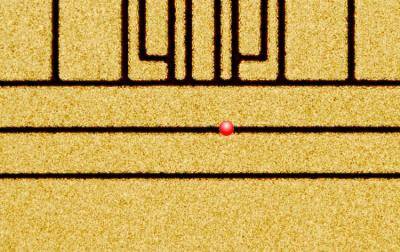 Credit: NIST
A quantum computer could potentially solve certain problems that are intractable using today's technology, even supercomputers. The NIST experiment with a single beryllium ion qubit, described in a forthcoming paper,* is a milestone for simple quantum logic operations. However, a working quantum computer also will require two-qubit logic operations with comparably low error rates.

"One error per 10,000 logic operations is a commonly agreed upon target for a low enough error rate to use error correction protocols in a quantum computer," explains Kenton Brown, who led the project as a NIST postdoctoral researcher. "It is generally accepted that if error rates are above that, you will introduce more errors in your correction operations than you are able to correct. We've been able to show that we have good enough control over our single-qubit operations that our probability of error is 1 per 50,000 logic operations."

The NIST experiment was performed on 1,000 unique sequences of logic operations randomly selected by computer software. Sequences of 10 different lengths, ranging from one to 987 operations, were repeated 100 times each. The measured results were compared to perfect theoretical outcomes. The maximum length of the sequences was limited by the hardware used to control the experiment.

The record low error rate was made possible by two major changes in the group's experimental setup. First, scientists manipulated the ion using microwaves instead of the usual laser beams. A microwave antenna was incorporated into the ion trap, with the ion held close by, hovering 40 micrometers above the trap surface. The use of microwaves reduced errors caused by instability in laser beam pointing and power, as well as spontaneous ion emissions. Second, the ion trap was placed inside a copper vacuum chamber and cooled to 4.2 K with a helium bath to reduce errors caused by magnetic field fluctuations in the lab.