In the evolutionary blink of an eye, a bacterium that causes mild stomach irritation evolved into a deadly assassin responsible for the most devastating pandemics in human history. How did the mild-mannered Yersinia pseudotuberculosis become Yersinia pestis, more commonly known as the Plague? 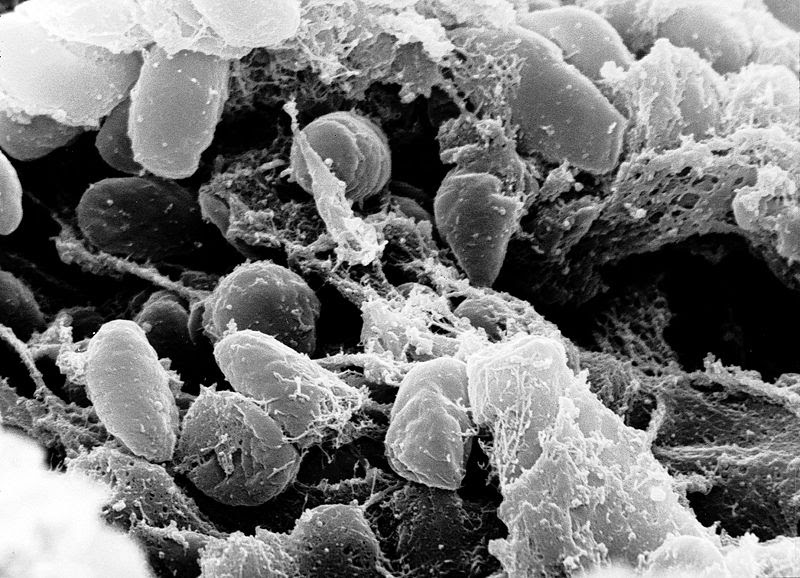 Image: Wikipedia
Now, scientists from Northwestern University Feinberg School of Medicine, with the use of new DNA sequencing techniques, offer long sought after evidence of how these two pathogens with virtually identical genetic matter could produce two such vastly different diseases. The Feinberg School team used the new DNA sequencing techniques to identify an unexpected source for these differences, which may help explain the Plague's rapid evolution.

The findings, to be published Aug. 29 in the journal Proceedings of the National Academy of Sciences, offer a glimpse into how the new technology might aid in the development of therapeutics to fight deadly diseases, including the Plague.

"Most people think of the Plague as a historic disease, but it's still a public health issue today, both in the human population and in animals," said Wyndham Lathem, lead author of the study and assistant professor of microbiology-immunology at Northwestern's Feinberg School. "It's extremely dangerous and highly virulent. Without treatment, it can take as little as three to five days from infection to death."

Globally, the World Health Organization reports 1,000 to 3,000 cases of Plague every year, and Y. pestis exists on every continent except Antarctica. The United States Department of Homeland Security classifies Y. pestis as a Category A biological agent, a group that also includes anthrax, smallpox and Ebola.

The Plague's ancestor, Y. pseudotuberculosis, still exists and infects humans, but it causes a mild gastrointestinal disease and most people don't show symptoms.

Lathem and colleagues have discovered the differences in disease severity between these two subspecies may have arisen from changes in small, non-coding RNAs (sRNAs), complex molecules involved in controlling many cellular processes.

The Northwestern team is the first to show that sRNAs in Yersinia affect virulence, a finding that suggests the evolution of pathogens may also occur at the level of changes in RNA and in the way protein-coding genes are regulated.

Lathem used advanced DNA sequencing technology — called high-throughput sequencing — to identify the complete set of sRNAs produced by Y. pseudotuberculosis. The technology enabled his team to study the diseases for the first time at a deeper genetic level.

"This technique enables us to really pick apart how pathogens evolve and how different species of bacteria are able to cause different types of disease," Lathem said. "It goes beyond looking at what proteins are produced by the bacteria. It's an additional layer of evolutionary analysis."

This detective work is important because if researchers can identify unique characteristics among deadly species such as Y. pestis, they may be able to generate new therapeutics or adapt current ones.

Unlike traditional "messenger" RNA, which is copied from DNA to create proteins and is well understood by scientists, these non-coding sRNA molecules are never translated into proteins. Hundreds of noncoding RNA molecules exist inside bacterial cells, but, until recently, scientists had not determined the function of many.

"Once we identified the complete set of sRNAs for Y. pseudotuberculosis, further analysis unlocked a number of surprising discoveries about their function," Lathem said.

Among these surprising discoveries, Lathem's team identified 150 sRNAs, a majority of which are specific to the Yersinia species, and six sRNAs unique to Y. pseudotuberculosis. Those six sRNAs are missing in Y. pestis, likely lost during its rapid evolution (somewhere between 1,500 and 20,000 years ago), and thereby potentially responsible for the Plague's virulence. Lathem's team developed this explanation because they could specify exactly which genes the sRNAs control.

First author Jovanka Koo, a postdoctoral fellow in Lathem's lab at Feinberg, noted, "An important lesson is that small changes can have big effects on sRNA functions. They can affect when an RNA is expressed or produced, the way that RNA folds, and the ability of that RNA to affect the regulated protein coding RNA." Over time, those small changes can become the difference between mild and deadly diseases.
Contacts and sources:
Marla Paul
Northwestern University
on August 29, 2011