Chinese geologists suggest that earthquakes can be triggered by reservoirs in a study of the Zipingpu Reservoir and Longmenshan Slip.
This figure is a presentation of viscous stress and Reynolds stress at multiple micro-spatial scales under ultra-high temperature and pressure conditions. 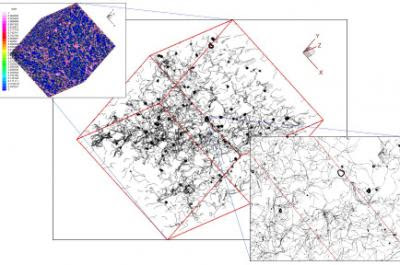 Describing the correlation of a reservoir and earthquake slip remains a great challenge. Professor SHI Yaolin and his group at the Key Laboratory of Computational Geodynamics of the Chinese Academy of Sciences and the College of Science of the Graduate University of the Chinese Academy of Sciences are attempting to solve this problem. On the basis of the laboratory's parallel central processing unit (CPU) and graphics processing unit (GPU) hardware platform, the micro FDPNC model for UTP conditions was established and the ECFS criteria and anisotropic porosity and permeability tensor, which includes pore pressure, pressure gradient, viscous stress and Reynolds stress, have been given. In the case of the Zipingpu reservoir and Longmenshan fault, the simulation results show that the extended viscous stress and Reynolds stress cannot be neglected. Their work, entitled "Application of flow driven pore-network crack model to Zipingpu reservoir and Longmenshan slip", was published in SCIENCE CHINA Physics, Mechanics & Astronomy, 2011, Vol. 54(8).

The interaction mechanism of a reservoir and fault slip has importance in terms of the economy, social security and other national issues as it relates to the effects of hydro-projects, landslides and reservoir earthquakes. Several approaches have been taken to study the mechanism owing to its complexity and social importance. The use of Coulomb failure theory is a classical method for addressing this problem and has provided many landmark achievements. However, it is not clear yet how water affects a fault slip, especially at a depth of about 10 km or more, which is an important consideration. It is suggested that Coulomb failure criteria should be improved by consideration of the viscous stress and Reynolds stress in addition to pore pressure and its gradient.

First, using micro-tomography data, the multi-spatial-scale flow-driven pore-network crack model was established, and the effects of viscous stress and Reynolds stress under UTP were determined for the first time (Figure 1).

Second, the hybrid hypersingular integral equation (HHIE) method and lattice Boltzmann (LBM) were combined to establish a link between the flow pore pressure and solid skeleton structure deformation/strength. The HHIE method deals with the crack initiation, propagation and transmission problem for the solid skeleton on multiple temporal–spatial scales (yellow in Figure 2 indicates the solid skeleton core), and the LBM deals with the flow-driven fluid pore problem on multiple temporal–spatial scales (black in Figure 2 indicates flow in pores).


This figure shows a presentation of the multi-spatial-scale FDPNC model. 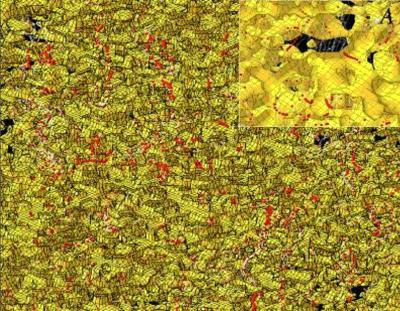 Credit: ©Science China Press
Combining the two methods, it is possible to study the coupled extended stress of the micro/meso/macro-scale structure at the interface of the pore and core by establishing the relationship between the extended pore fluid pressure and extended core stress, and analyze porosity and permeability under different initial and boundary conditions.

Finally, the relationship among the water-drainage sluice processes of a reservoir, stress triggers, earthquake shadows and porosity variability in a fault slip zone has been analyzed. The vadose energy (which results from pore pressure and can flow to the fault slip tip) differs for undrained and drained zones, with more energy being released in a drained zone than in an undrained zone. If the fault slip is a stable creep rupture process, the energy criteria (strain energy function factors) must increase with the rate at which the fault spreads.
When penetration reaches a stable stage, the role of the initiation and propagation of the fluid FDPNC becomes dominant. As the time scale increases, the solid–fluid interface weakens and blurs microscopically, while macroscopically, the porosity increases. Strain energy is released during the slip process, and decreases as spreading increases in the drained zone.

The reservoir loading and earthquake trigger relationship depends on the fault-slip geometry and character, the porosity variability of the surrounding geological structure and the temporal and spatial scales. In the case of the Zipingpu reservoir and 2008 Wenchuan earthquake, the porosity and temporal scale are important factors, and they need to be investigated in further field and laboratory experiments.