The giant 11 March 2011 magnitude 9 Tohoku earthquake not only shook the Earth and caused devastating tsunamis but also rattled the ionosphere, according to a new study.

The ionosphere is a part of the upper atmosphere, comprising portions of the mesosphere, thermosphere and exosphere, distinguished because it is ionized by solar radiation. It plays an important part in atmospheric electricity and forms the inner edge of the magnetosphere. It has practical importance because, among other functions, it influences radio propagation to distant places on the Earth. 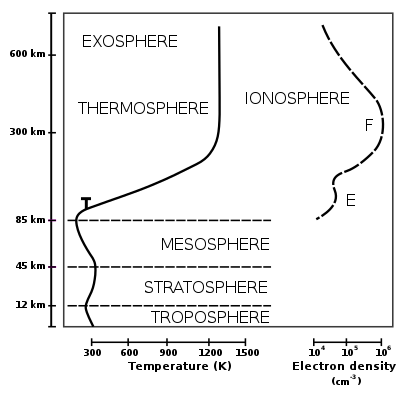 The ionosphere is a shell of electrons and electrically charged atoms and molecules that surrounds the Earth, stretching from a height of about 50 km to more than 1000 km. It owes its existence primarily to ultraviolet radiation from the Sun.

The surface seismic waves and tsunamis triggered waves in the atmosphere. These atmospheric waves propagated upward into the ionosphere, creating ripples in ionized gas nearly 350 kilometers above the Earth.

Liu et al. measured these disturbances, called seismotraveling ionospheric disturbances (STID), using GPS receivers in Japan. The first disturbance appeared as a disk-shaped increase in electron density in the ionosphere about 7 minutes after the earthquake.

Sequences of concentric waves of increased electron density then traveled from the STID center. Similar ionospheric disturbances have been observed following other earthquakes, but these were the largest ever seen, the authors report.