During the last prolonged warm spell on Earth, the oceans were at least four meters - and possibly as much as 6.5 meters, or about 20 feet - higher than they are now.

Where did all that extra water come from? Mainly from melting ice sheets on Greenland and Antarctica, and many scientists, including University of Wisconsin-Madison geoscience assistant professor Anders Carlson, have expected that Greenland was the main culprit.
Sediment-laden glacial outwash streams from the West Greenland ice margin flow toward a fjord. Melting ice from Greenland may have raised ocean levels less than expected during the most-recent prolonged warm spell on Earth, researchers from the University of Wisconsin–Madison and Oregon State University have shown. The surprising patterns of ice melt found by new research suggest that Greenland’s ice sheet may be more stable — and Antarctica’s less stable — than previously thought. 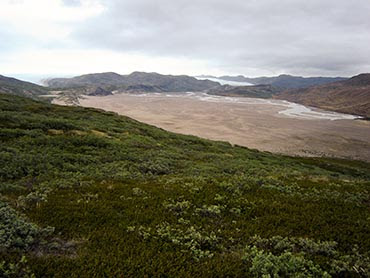 Photo by: courtesy Anders Carlson, UW–Madison
But Carlson's new results, published July 29 in Science, are challenging that assertion, revealing surprising patterns of melting during the last interglacial period that suggest that Greenland's ice may be more stable - and Antarctica's less stable - than many thought.

"The Greenland Ice Sheet is melting faster and faster," says Carlson, who is also a member of the Center for Climatic Research in the Nelson Institute for Environmental Studies. But despite clear observations of that fact, estimates of just how much the ice will melt and contribute to sea level rise by the end of this century are highly varied, ranging from a few centimeters to meters. "There's a clear need to understand how it has behaved in the past, and how it has responded to warmer-than-present summers in the past."

The ice-estimation business is rife with unknown variables and has few known physical constraints, Carlson explains, making ice sheet behavior - where they melt, how much, how quickly - the largest source of uncertainty in predicting sea level rises due to climate change. His research team sought a way to constrain where ice remained on Greenland during the last interglacial period, around 125,000 years ago, to better define past ice sheet behavior and improve future projections.
Anders Carlson, a University of Wisconsin–Madison geologist, surveys an outlet glacier in southwest Greenland. Carlson and colleagues from UW–Madison and Oregon State University have shown that melting ice from Greenland may have raised ocean levels less than expected during the most-recent prolonged warm spell on Earth. 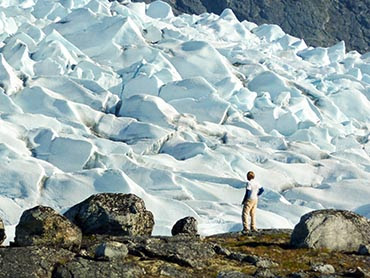 Photo by: courtesy Robert Hatfield, Oregon State University
The researchers analyzed silt from an ocean-floor core taken from a region off the southern tip of Greenland that receives sediments carried by meltwater streams off the ice sheet. They used different patterns of radiogenic isotopes to identify sources of the sediment, tracing the silt back to one of three "terranes" or regions, each with a distinct geochemical signature. The patterns of sedimentation show which terranes were still glaciated at that time.

"If the land deglaciates, you lose that sediment," Carlson explains. But to their surprise, they found that all the terranes were still supplying sediment throughout the last interglacial period and thus still had some ice cover.

"The ice definitely retreated to smaller than present extent and definitely raised sea level to higher than present" and continued to melt throughout the warm period, he adds, but the sediment analysis indicates that "the ice sheet seems to be more stable than some of the greater retreat values that people have presented."
An outlet glacier in southern Greenland. Melting ice from Greenland may have raised ocean levels less than expected during the most-recent prolonged warm spell on Earth, researchers from the University of Wisconsin–Madison and Oregon State University have shown. 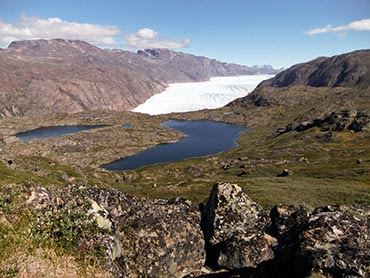 Photo by: courtesy Kelsey Winsor, UW–Madison
The team used their results to evaluate several existing models of Greenland ice sheet melting during the last interglacial period. The models consistent with the new findings indicate that melting Greenland ice was responsible for a sea level rise of 1.6 to 2.2 meters - at most, roughly half of the minimum four-meter total increase.

Even after accounting for other Arctic ice and the thermal expansion of warmer water, most of the difference must have come from a melting Antarctic ice sheet, Carlson says.

"The implication of our results is that West Antarctica likely was much smaller than it is today," and responsible for much more of the sea level rise than many scientists have thought, he says. "If West Antarctica collapsed, that means it's more unstable than we expected, which is quite scary."

Ultimately, Carlson says he hopes this line of research will improve the representation of ice sheet responses to a warming planet in future Intergovernmental Panel on Climate Change (IPCC) reports. Temperatures during the last interglacial period were similar to those expected by the end of this century, and present-day temps have already reached a point that Greenland's glaciers are melting.