Fair Play – A Question Of Self-Image?

Why do people behave selfishly and accept that their behaviour may have negative consequences for others? Astrid Matthey and Tobias Regner from the Max Planck Institute of Economics in Jena investigated this question in a laboratory experiment. They found that such behaviour often depends on whether information about the consequences for others can be ignored. Based on their findings, the researchers believe that conclusions can be drawn on, for instance, how the marketing of fairtrade products could be improved.
Fair trade products could profit from the provision of information because the latter is of central importance to the behaviour of the majority whose decisions can vary. 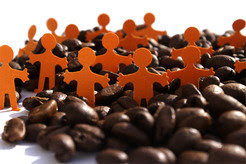 The researchers had 90 test subjects divide sums of money between themselves and anonymous co-players in the course of four different rounds of a game. During some of the rounds, the subjects received precise information about how their decisions would affect the payments made to their unknown co-players. In other rounds, the subjects themselves could decide whether they would like to find out about the consequences of their distribution decisions or whether they would prefer to conceal this information.
“We found that although there are people who act either selfishly (“convinced pro-self”) or fairly (“genuine pro-socials”),” explains Tobias Regner, “many individuals move in the grey area between these extremes. They act fairly if the consequences of their action for others are clear to them. However, if they have the opportunity to ignore these consequences, they do just that and act in their own interests.”

What is the motivation behind this ignorance? The experimental economists from Jena found a possible explanation for this behaviour in the concept of “cognitive dissonance”. According to this concept, people tend to make decisions on the basis of their self-image. If they believe themselves to be “fair” or “generous”, for example, they avoid actions that are clearly egoistic in nature, so as to avoid contradicting their own self-image.
However, if, as was possible in the experiment described here, they are able to ignore the consequences for other people, they find it easier to maintain a positive self-image, even if they their behaviour is selfish. “If the consequences are clearly visible, many participants decide to act fairly,” reports Astrid Matthey: “However, if it is possible to ignore the consequences, it is clearly more difficult to opt for a ‘generous’ decision, and many change their behaviour and select the egoistic alternative.”

Politicians would do well to pay attention to these findings because, in the researchers’ opinion, they can be applied directly to the development of political instruments, for example, for the promotion of sustainable consumer behaviour: “We believe that the provision of information is of central importance to the behaviour of the majority whose decisions can vary,” says Regner.
Therefore, the researchers have the following advice for the marketing of fair trade products: if the information about the conditions, under which coffee or clothing are produced is clearly indicated on the packaging, for example, many people would have difficulty in deciding to purchase an unfairly traded but cheaper product. “Under such conditions, we would expect higher sales for products with the ‘fairtrade’ label,” explains Regner’s colleague Matthey.
on July 28, 2011