More than seven years into what was planned as a three-month mission on Mars, NASA's Mars Exploration Rover Opportunity has driven more than 20 miles, which is more than 50 times the mission's original distance goal.

A drive of 407 feet (124 meters) completed on July 17 took Opportunity past the 20-mile mark (32.2 kilometers). It brought the rover to within a few drives of reaching the rim of Endeavour crater, the rover's team's long-term destination since mid-2008. Endeavour is about 14 miles (22 kilometers) in diameter, and its western rim exposes outcrops that record information older than any Opportunity has examined so far. The rover is now about eight-tenths of a mile (about 1.3 kilometers) from the site chosen for arriving at the rim.

NASA's Mars Exploration Rover Opportunity used its navigation camera to record this view in the eastward driving direction after completing a drive on July 17, 2011, that took the rover's total driving distance on Mars beyond 20 miles. 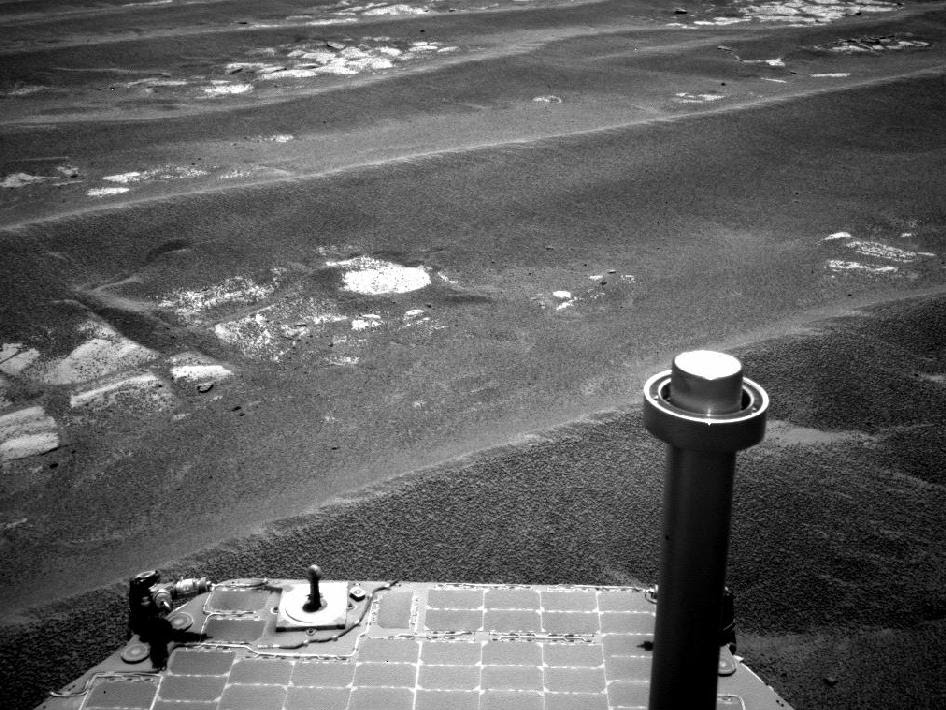 "The numbers aren't really as important as the fact that driving so much farther than expected during this mission has put a series of exciting destinations within Opportunity's reach," said Alfonso Herrera, a rover mission manager at NASA's Jet Propulsion Laboratory, Pasadena, Calif. who has worked on the rover missions since before launch in 2003.

The latest drive included an autonomous hazard detection portion during which the rover paused at intervals to check for obstacles before proceeding.

Herrera said, "Autonomous hazard detection has added a significant portion of the driving distance over the past few months. It lets us squeeze 10 to 15 percent more distance into each drive."

The milestone-setting drive was on the 2,658th Martian day, or "sol," of the rover's exploration of Mars. Opportunity drove backward. Backward driving is a technique to extend the life of a motor in the right-front wheel that sometimes draws more current than the other five wheels' drive motors.

JPL's Bill Nelson, chief of the mission's engineering team, said, "Opportunity has an arthritic shoulder joint on her robotic arm and is a little lame in the right front wheel, but she is otherwise doing remarkably well after seven years on Mars -- more like 70 in 'rover years.' The elevated right front wheel current is a concern, but a combination of heating and backwards driving has kept it in check over the past 2,000-plus sols."

Opportunity and its rover twin, Spirit, completed their three-month prime missions on Mars in April 2004. Both rovers continued for years of bonus, extended missions. Spirit finished communicating with Earth in March 2010. Both rovers have made important discoveries about wet environments on ancient Mars that may have been favorable for supporting microbial life.

NASA's Jet Propulsion Laboratory, a division of the California Institute of Technology in Pasadena, manages the Mars Exploration Rover Project for the NASA Science Mission Directorate, Washington. More information about the rovers is online at: http://www.nasa.gov/rovers .