Many animals have eyes that are incredibly complex – others manage without. Researchers at the University of Gothenburg have shown that sea urchins see with their entire body despite having no eyes at all. The study has been published in the scientific journalProceedings of the National Academy of Sciences (PNAS).
These are sea urchins. 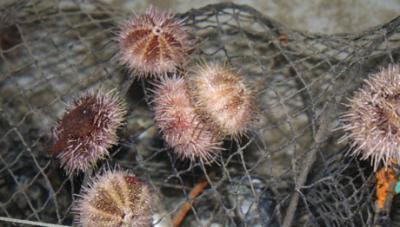 Credit: University of Gothenburg
Most animals react to light and have developed a very sophisticated way of seeing complex images so that they can function in their surroundings. Good examples include insects' compound eyes and the human eye. Charles Darwin and other evolutionary biologists were bewildered by the eye's complexity and wondered how this kind of structure could have evolved through natural selection.

But some creatures, such as sea urchins, can react to light even though they do not have eyes. Previous studies of sea urchins have shown that they have a large number of genes linked to the development of the retina, which is the light-sensitive tissue in the human eye. This means that sea urchins have several genes that are coded for a widely occurring eye protein, opsin.

"It was this discovery that underpinned our research," says Sam Dupont from the University of Gothenburg's Department of Marine Ecology, one of the researchers behind the study and co-authors of the article. "We wanted to see where the opsin was located in sea urchins so that we could find the sensory light structures, or photoreceptors. We quite simply wanted to know where the sea urchin sees from."

The research group behind the study showed that the photoreceptors seem to be located on the tip and base of the tube feet that are found all over the sea urchin's body and are used to move.

"We argue that the entire adult sea urchin can act as a huge compound eye, and that the shadow that is cast by the animal's opaque skeleton over the light-sensitive cells can give it directional vision," says Dupont.