Applying an ointment commonly used in angina treatment to snake bite wounds can improve survival times by up to 50 per cent according to latest research from the University of Newcastle.

Australia is home to 140 species of land snake, and around 32 species of sea snakes which have been recorded in Australian waters. About 100 Australian snakes are venomous,  and 12 are likely to inflict a wound that could kill a person. The most dangerous snakes belong to the front-fanged group, which includes the Tiger, Brown, Death Adder, Mulga or King Brown and a few species of sea snake. Australia’s other snakes are the solid-toothed non-venomous snakes (such as pythons, blind snakes and file snakes) and venomous rear-fanged snakes (such as the brown tree snake and mangrove snakes).
Death Adder 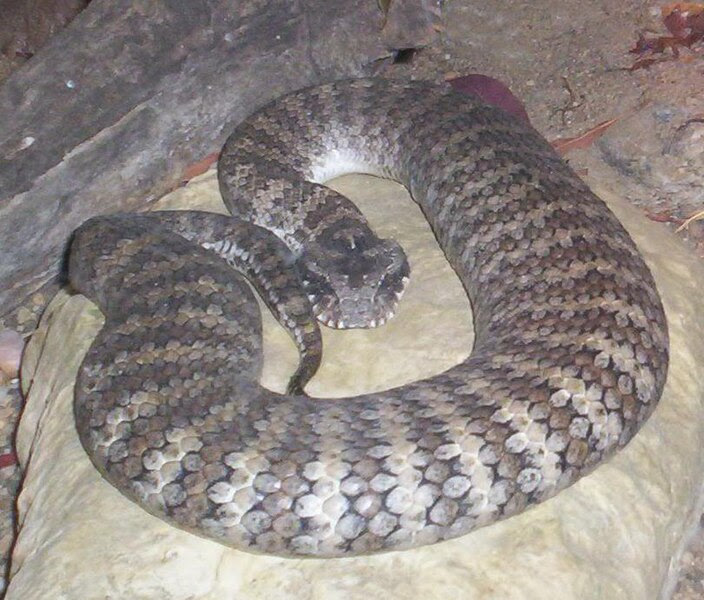 Image: Wikipedia
Published today in Nature Medicine, the study found that applying ointment containing glyceryl trinitrate slowed down the transport of the snakebite toxin through the lymphatic system into the bloodstream.

“Many snake venom toxins do not enter the bloodstream directly but are absorbed and transported by lymphatic vessels before entering the veins near the heart,” Associate Professor Dirk van Helden said.

The group found that applying the ointment containing glyceryl trinitrate slowed the transport of the venom through the lymphatic system, thereby slowing the effect of the toxin. Applying the ointment with a ‘mock venom’ to healthy human volunteers confirmed the findings.

“The ointment does not inactivate the venom. In Australia it could be recommended to be used with existing treatments such as pressure bandaging with immobilisation, to slow the transport to the circulation system in the body. It will be particularly beneficial for victims in remote areas, allowing them more time to seek medical help.

“Each year snake bites account for 100,000 deaths and 400,000 amputations worldwide. This finding has the potential to significantly improve the survival rates of the bite victims of many snake species,” Associate Professor van Helden said.

This project was funded by the Hunter Medical Research Institute (HMRI). University of Newcastle researchers work in collaboration with HMRI - a partnership between the University, Hunter New England Health and the community.

Led by the University of Newcastle’s Associate Professor Dirk van Helden, the research was conducted in collaboration with the John Hunter Hospital and the Calvary Mater Newcastle.

Prof van Helden is a Principal Research Fellow with the National Health and Medical Research Council.