In December 2010, a pair of mismatched stars in the southern constellation Crux whisked past each other at a distance closer than Venus orbits the sun. The system possesses a so-far unique blend of a hot and massive star with a compact fast-spinning pulsar. The pair's closest encounters occur every 3.4 years and each is marked by a sharp increase in gamma rays, the most extreme form of light.

The unique combination of stars, the long wait between close approaches, and periods of intense gamma-ray emission make this system irresistible to astrophysicists. Now, a team using NASA's Fermi Gamma-ray Space Telescope to observe the 2010 encounter reports that the system displayed fascinating and unanticipated activity.

Every 3.4 years, pulsar B1259-63 dives twice through the gas disk surrounding the massive blue star it orbits. With each pass, it produces gamma rays. During the most recent event, NASA's Fermi observed that the pulsar's gamma-ray flare was much more intense the second time it plunged through the disk. Astronomers don't yet know why.

Credit: NASA's Goddard Space Flight Center, Conceptual Image Lab
› Download additional video formats from NASA Goddard's Scientific Visualization Studio
› System animation only
"Even though we were waiting for this event, it still surprised us," said Aous Abdo, a Research Assistant Professor at George Mason University in Fairfax, Va., and a leader of the research team.

Few pairings in astronomy are as peculiar as high-mass binaries, where a hot blue-white star many times the sun's mass and temperature is joined by a compact companion no bigger than Earth -- and likely much smaller. Depending on the system, this companion may be a burned-out star known as a white dwarf, a city-sized remnant called a neutron star (also known as a pulsar) or, most exotically, a black hole.

Just four of these "odd couple" binaries were known to produce gamma rays, but in only one of them did astronomers know the nature of the compact object. That binary consists of a pulsar designated PSR B1259-63 and a 10th-magnitude Be-type star known as LS 2883. The pair lies 8,000 light-years away.

The pulsar is a fast-spinning neutron star with a strong magnetic field. This combination powers a lighthouse-like beam of energy, which astronomers can easily locate if the beam happens to sweep toward Earth. The beam from PSR B1259-63 was discovered in 1989 by the Parkes radio telescope in Australia. The neutron star is about the size of Washington, D.C., weighs about twice the sun's mass, and spins almost 21 times a second.

The pulsar follows an eccentric and steeply inclined orbit around LS 2883, which weighs roughly 24 solar masses and spans about nine times its size. This hot blue star sits embedded in a disk of gas that flows out from its equatorial region.

At closest approach, the pulsar passes less than 63 million miles from its star -- so close that it skirts the gas disk around the star's middle. The pulsar punches through the disk on the inbound leg of its orbit. Then it swings around the star at closest approach and plunges through the disk again on the way out.
This diagram, which illustrates the view from Earth, shows the binary's anatomy as well as key events in the pulsar's recent close approach. 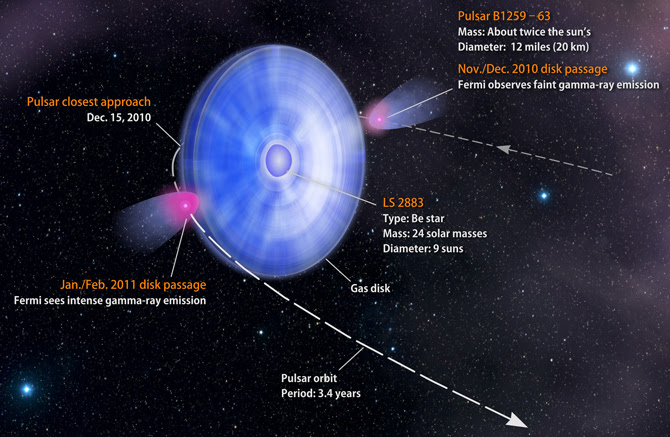 "During these disk passages, energetic particles emitted by the pulsar can interact with the disk, and this can lead to processes that accelerate particles and produce radiation at different energies," said study co-author Simon Johnston of the Australia Telescope National Facility in Epping, New South Wales. "The frustrating thing for astronomers is that the pulsar follows such an eccentric orbit that these events only happen every 3.4 years."

In anticipation of the Dec. 15, 2010, closest approach, astronomers around the world mounted a multiwavelength campaign to observe the system over a broad energy range, from radio wavelengths to the most energetic gamma rays detectable. The observatories included Fermi and NASA's Swift spacecraft; the European space telescopes XMM-Newton and INTEGRAL; the Japan-U.S. Suzaku satellite; the Australia Telescope Compact Array; optical and infrared telescopes in Chile and South Africa; and the High Energy Stereoscopic System (H.E.S.S.), a ground-based observatory in Namibia that can detect gamma rays with energies of trillions of electron volts, beyond Fermi's range. (For comparison, the energy of visible light is between two and three electron volts.)

"When you know you have a chance of observing this system only once every few years, you try to arrange for as much coverage as you can," said Abdo, the principal investigator of the NASA-funded international campaign. "Understanding this system, where we know the nature of the compact object, may help us understand the nature of the compact objects in other, similar systems."

Despite monitoring of the system with the EGRET telescope aboard NASA's Compton Gamma-Ray Observatory in the 1990s, gamma-ray emission in the billion-electron-volt (GeV) energy range had never been seen from the binary.

"During the first disk passage, which lasted from mid-November to mid-December, the LAT recorded faint yet detectable emission from the binary. We assumed that the second passage would be similar, but in mid-January 2011, as the pulsar began its second passage through the disk, we started seeing surprising flares that were many times stronger than those we saw before," Abdo said.

Stranger still, the system's output at radio and X-ray energies showed nothing unusual as the gamma-ray flares raged.

"The most intense days of the flare were Jan. 20 and 21 and Feb. 2, 2011," said Abdo. "What really surprised us is that on any of these days, the source was more than 15 times brighter than it was during the entire month-and-a-half-long first passage."

The study will appear in the July 20 issue of The Astrophysical Journal Letters and is available online.

"One great advantage of the Fermi LAT observations is the continuous monitoring of the source, which gives us the most complete gamma-ray observations of this system," said Julie McEnery, the Fermi project scientist at NASA's Goddard Space Flight Center in Greenbelt, Md.

Astronomers are continuing to analyze their bounty of data and working to understand the surprising flares. And in May 2014, when the pulsar once again approaches its giant companion, they'll be watching.
Contacts and sources: