Neutron Star Bites Off More Than It Can Chew, Flares To 10,000 X Normal Brightness

ESA’s XMM-Newton space observatory has watched a faint star flare up at X-ray wavelengths to almost 10 000 times its normal brightness. Astronomers believe the outburst was caused by the star trying to eat a giant clump of matter.

The flare took place on a neutron star, the collapsed heart of a once much larger star. Now about 10 km in diameter, the neutron star is so dense that it generates a strong gravitational field.
This animated sequence of images illustrates the partial ingestion of a clump of matter by the neutron star hosted in the Supergiant Fast X-Ray Transient, IGR J18410-0535. The ingestion of the clump material produced a dramatic increase in the X-rays released by the neutron star, which was detected with XMM-Newton. The peak in the X-ray luminosity corresponds to the period when the accretion rate was at its maximum.

The clump of matter was much larger than the neutron star and came from its enormous blue supergiant companion star.

“This was a huge bullet of gas that the star shot out, and it hit the neutron star allowing us to see it,” says Enrico Bozzo, ISDC Data Centre for Astrophysics, University of Geneva, Switzerland, and team leader of this research.

The flare lasted four hours and the X-rays came from the gas in the clump as it was heated to millions of degrees while being pulled into the neutron star’s intense gravity field. In fact, the clump was so big that not much of it hit the neutron star. Yet, if the neutron star had not been in its path, this clump would probably have disappeared into space without trace.

XMM-Newton caught the flare during a scheduled 12.5-hour observation of the system, which is known only by its catalogue number IGR J18410-0535, but the astronomers were unaware of their catch immediately.

An artist's impression of XMM-Newton. 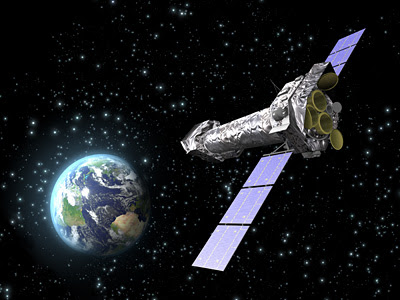 Credits: ESA-C. Carreau
The telescope works through a sequence of observations carefully planned to make the best use of the space observatory’s time, then sends the data to Earth.

It was about ten days after the observation that Dr Bozzo and his colleagues received the data and quickly realised they had something special. Not only were they pointing in the right direction to see the flare, but the observation had lasted long enough for them to see it from beginning to end.

“I don’t know if there is any way to measure luck, but we were extremely lucky,” says Dr Bozzo. He estimates that an X-ray flare of this magnitude can be expected a few times a year at the most for this particular star system.

The duration of the flare allowed them to estimate the size of the clump. It was much larger than the star, probably 16 million km across, or about 100 billion times the volume of the Moon. Yet, according to the estimate made from the flare’s brightness, the clump contained only one-thousandth of our natural satellite’s mass.

These figures will help astronomers understand the behaviour of the blue supergiant and the way it emits matter into space. All stars expel atoms into space, creating a stellar wind. The X-ray flare shows that this particular blue supergiant does it in a clumpy fashion, and the estimated size and mass of the cloud allow constraints to be placed on the process.

“This remarkable result highlights XMM-Newton's unique capabilities,” comments Norbert Schartel, XMM-Newton Project Scientist. “Its observations indicate that these flares can be linked to the neutron star attempting to ingest a giant clump of matter.”