A team of researchers from the National Institute of Standards and Technology (NIST), George Mason University and the University of Maryland has made nano-sized sensors that detect volatile organic compounds—harmful pollutants released from paints, cleaners, pesticides and other products—that offer several advantages over today's commercial gas sensors, including low-power room-temperature operation and the ability to detect one or several compounds over a wide range of concentrations.

Scanning electron microscope image of a gas sensor segment fabricated of a semiconducting nanowire of gallium nitride. The nanowire of less than 500 nanometers across is coated with nanoclusters of titanium dioxide, which alters the current in the nanowire in the presence of a volatile organic compound and ultraviolet light. 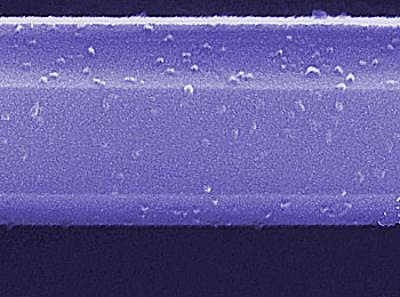 The recently published work* is proof of concept for a gas sensor made of a single nanowire and metal oxide nanoclusters chosen to react to a specific organic compound. This work is the most recent of several efforts at NIST that take advantage of the unique properties of nanowires and metal oxide elements for sensing dangerous substances.

Modern commercial gas sensors are made of thin, conductive films of metal oxides. When a volatile organic compound like benzene interacts with titanium dioxide, for example, a reaction alters the current running through the film, triggering an alarm. While thin-film sensors are effective, many must operate at temperatures of 200° C (392° F) or higher. Frequent heating can degrade the materials that make up the films and contacts, causing reliability problems. In addition, most thin-film sensors work within a narrow range: one might catch a small amount of toluene in the air, but fail to sniff out a massive release of the gas. The range of the new nanowire sensors runs from just 50 parts per billion up to 1 part per 100, or 1 percent of the air in a room.

These new sensors, built using the same fabrication processes that are commonly used for silicon computer chips, operate using the same basic principle, but on a much smaller scale: the gallium nitride wires are less than 500 nanometers across and less than 10 micrometers in length. Despite their microscopic size, the nanowires and titanium dioxide nanoclusters they're coated with have a high surface-to-volume ratio that makes them exquisitely sensitive.

"The electrical current flowing through our nanosensors is in the microamps range, while traditional sensors require milliamps," explains NIST's Abhishek Motayed. "So we're sensing with a lot less power and energy. The nanosensors also offer greater reliability and smaller size. They're so small that you can put them anywhere." Ultraviolet light, rather than heat, promotes the titanium dioxide to react in the presence of a volatile organic compound.

Further, each nanowire is a defect-free single crystal, rather than the conglomeration of crystal grains in thin-film sensors, so they're less prone to degradation. In reliability tests over the last year, the nano-sized sensors have not experienced failures. While the team's current experimental sensors are tuned to detect benzene as well as the similar volatile organic compounds toluene, ethylbenzene and xylene, their goal is to build a device that includes an array of nanowires and various metal oxide nanoclusters for analyzing mixtures of compounds. They plan to collaborate with other NIST teams to combine their ultraviolet light approach with heat-induced nanowire sensing technologies.

Contacts and sources:
Michael Baum
National Institute of Standards and Technology (NIST)
The portion of this work conducted at George Mason University was funded by the National Science Foundation.