Scientists have discovered fundamental steps of charging of nano-sized water droplets and unveiled the long-sought-after mechanism of hydrogen emission from irradiated water. Working together at the Georgia Institute of Technology and Tel Aviv University, scientists have discovered when the number of water molecules in a cluster exceeds 83, two excess electrons may attach to it — forming dielectrons — making it a doubly negatively charged nano droplet.
Furthermore, the scientists found experimental and theoretical evidence that in droplets comprised of 105 molecules or more, the excess dielectrons participate in a water-splitting process resulting in the liberation of molecular hydrogen and formation of two solvated hydroxide anions. The results appear in the June 30 issue of theJournal of Physical Chemistry A.

Understanding the nature of excess electrons in water has captured the attention of scientists for more than half a century, and the hydrated electrons are known to appear as important reagents in charge-induced aqueous reactions and molecular biological processes.
Moreover, since the discovery in the early 1960s that the exposure of water to ionizing radiation causes the emission of gaseous molecular hydrogen, scientists have been puzzled by the mechanism underlying this process. After all, the bonds in the water molecules that hold the hydrogen atoms to the oxygen atoms are very strong. The dielectron hydrogen-evolution (DEHE) reaction, which produces hydrogen gas and hydroxide anions, may play a role in radiation-induced reactions with oxidized DNA that have been shown to underlie mutagenesis, cancer and other diseases.

"The attachment of multiple electrons to water droplets is controlled by a fine balancing act between the forces that bind the electrons to the polar water molecules and the strong repulsion between the negatively charged electrons," said Uzi Landman, Regents' and Institute Professor of Physics, F.E. Callaway Chair and director of the Center for Computational Materials Science (CCMS) at Georgia Tech.

"Additionally, the binding of an electron to the cluster disturbs the equilibrium arrangements between the hydrogen-bonded water molecules and this too has to be counterbalanced by the attractive binding forces. To calculate the pattern and strength of single and two-electron charging of nano-size water droplets, we developed and employed first-principles quantum mechanical molecular dynamics simulations that go well beyond any ones that have been used in this field," he added.

Investigations on controlled size-selected clusters allow explorations of intrinsic properties of finite-sized material aggregates, as well as probing of the size-dependent evolution of materials properties from the molecular nano-scale to the condensed phase regime.

In the 1980s Landman, together with senior research scientists in the CCMS Robert Barnett, the late Charles Cleveland and Joshua Jortner, professor of chemistry at Tel Aviv University, discovered that there are two ways that single excess electrons can attach to water clusters – one in which they bind to the surface of the water droplet, and the other where they localize in a cavity in the interior of the droplet, as in the case of bulk water.
Subsequently, Landman, Barnett and graduate student Harri-Pekka Kaukonen reported in 1992 on theoretical investigations concerning the attachment of two excess electrons to water clusters. They predicted that such double charging would occur only for sufficiently large nano-droplets. They also commented on the possible hydrogen evolution reaction. No other work on dielectron charging of water droplets has followed since.

That is until recently, when Landman, now one of the world leaders in the area of cluster and nano science, and Barnett teamed up with Ori Chesnovsky, professor of chemistry, and research associate Rina Giniger at Tel Aviv University, in a joint project aimed at understanding the process of dielectron charging of water clusters and the mechanism of the ensuing reaction - which has not been observed previously in experiments on water droplets.
Using large-scale, state-of-the-art first-principles dynamic simulations, developed at the CCMS, with all valence and excess electrons treated quantum mechanically and equipped with a newly constructed high-resolution time-of-flight mass spectrometer, the researchers unveiled the intricate physical processes that govern the fundamental dielectron charging processes of microscopic water droplets and the detailed mechanism of the water-splitting reaction induced by double charging.

The theoretical analysis demonstrated two dominant attachment modes of dielectrons to water clusters. The first is a surface mode (SS'), where the two repelling electrons reside in antipodal sites on the surface of the cluster (see the two wave functions, depicted in green and blue, in Figure 1).
This image shows the surface attachment mode of two excess electrons to a water cluster (average diameter of close to 2nm) comprised of 105 molecules. The shown configuration was obtained from first-principles quantum simulations. The two wave functions each occupied by one excess electron, depicted in blue and green, are localized at opposite sides of the cluster and they are shown superimposed on the water molecules. The oxygens and hydrogens of the water molecules are represented by red and gray spheres, respectively. (Fig. #1) 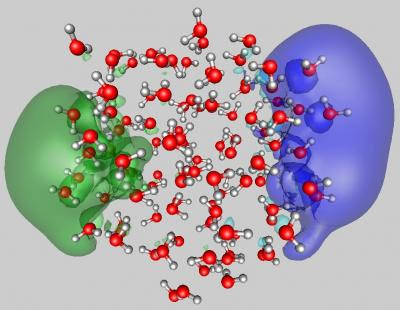 Credit: Uzi Landman/Georgia Tech
The second is another attachment mode with both electrons occupying a wave function localized in a hydration cavity in the interior of the cluster — the so-called II binding mode (see wave function depicted in pink in Figure 2). While both dielectron attachment modes may be found for clusters with 105 molecules and larger ones, only the SS' mode is stable for doubly charged smaller clusters.

This image shows the internal attachment mode of two electrons to a water cluster (average diameter of close to 2nm) comprised of 105 molecules. The shown configuration was obtained from first-principles quantum simulations. The wave function of the two excess electrons is depicted in pink and it is shown superimposed on the water molecules of the cluster. The compact dielectron distribution is localized in a hydration cavity in the interior of the cluster. The configuration shown here corresponds to the start of the dielectron hydrogen-evolution reaction. The protons of the two reacting neighboring water molecules, located approximately in the middle of the figure, are depicted by smaller blue spheres. Together with the dielectron these protons would form, in the course of the reaction, a hydrogen molecule. The oxygens and hydrogens of the water molecules are represented by red and gray spheres, respectively. 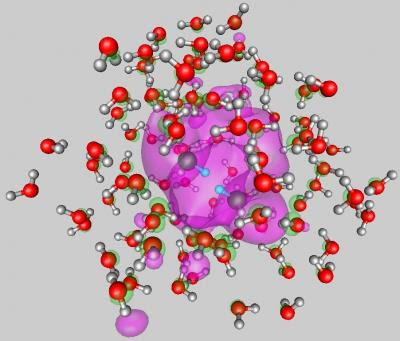 "Moreover, starting from the II, internal cavity attachment mode in a cluster comprised of 105 water molecules, our quantum dynamical simulations showed that the concerted approach of two protons from two neighboring water molecules located on the first shell of the internal hydration cavity, leads, in association with the cavity-localized excess dielectron (see Figure 2), to the formation of a hydrogen molecule. The two remnant hydroxide anions diffuse away via a sequence of proton shuttle processes, ultimately solvating near the surface region of the cluster, while the hydrogen molecule evaporates," said Landman.

"What's more, in addition to uncovering the microscopic reaction pathway, the mechanism which we discovered requires initial proximity of the two reacting water molecules and the excess dielectron. This can happen only for the II internal cavity attachment mode. Consequently, the theory predicts, in agreement with the experiments, that the reaction would be impeded in clusters with less than 105 molecules where the II mode is energetically highly improbable. Now, that's a nice consistency check on the theory," he added.

As for future plans, Landman remarked, "While I believe that our work sets methodological and conceptual benchmarks for studies in this area, there is a lot left to be done. For example, while our calculated values for the excess single electron detachment energies are found to be in quantitative agreement with photoelectron measurements in a broad range of water cluster sizes — containing from 15 to 105 molecules — providing a consistent interpretation of these measurements, we would like to obtain experimental data on excess dielectron detachment energies to compare with our predicted values," he said.

"Additionally, we would like to know more about the effects of preparation conditions on the properties of multiply charged water clusters. We also need to understand the temperature dependence of the dielectron attachment modes, the influence of metal impurities, and possibly get data from time-resolved measurements. The understanding that we gained in this experiment about charge-induced water splitting may guide our research into artificial photosynthetic systems, as well as the mechanisms of certain bio-molecular processes and perhaps some atmospheric phenomena."

"You know," he added. "We started working on excess electrons in water clusters quite early, in the 1980s — close to 25 years ago. If we are to make future progress in this area, it will have to happen faster than that."