Evolution Bites: Divergence In How Fish and Mammals Use The Tongue To Chew

New research from Brown University shows that fish and mammals chew differently. Fish use tongue muscles to thrust food backward, while mammals use tongue muscles to position food for grinding. The evolutionary divergence is believed to have occurred with amphibians, though further research is needed to identify which species and when. Results are published in Integrative and Comparative Biology.

Evolution has made its marks — large and small — in innumerable patterns of life. New research from Brown University shows chewing has evolved too.

Jaws, tongue, and teeth: Nicolai Konow and colleagues have learned that fish chew differently from mammals. The evolutionary divergence likely occurred with amphibians, though further research is needed to identify which species and when. 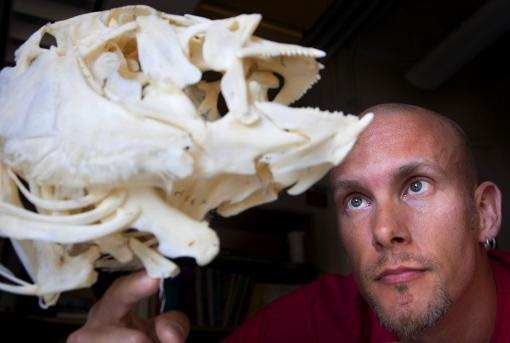 Source: Brown University
“It’s pretty clear that all of these animals chew, but the involvement of the tongue in chewing differs,” said Nicolai Konow, a postdoctoral researcher at Brown and the lead author on the study, published in the journal of Integrative and Comparative Biology. “And that brings up the question of what the muscles associated with the tongue and the jaw are doing.”

In 2008 and last year, Konow and colleagues published papers showing the chewing technique of bowfin, pike, and fish with tiny teeth on their tongues such as salmon and osteoglossomorphs (fish with bony tongues). In some of these species, the researchers showed that chewing begins with the tongue positioned in the upper mouth. Then the fish fires the muscle, called the sternohyoid, downward, retracting the tongue inward, before moving it forward again, and upward, to its original position in the upper mouth. With the fish facing left, the chewing cycle looks like an ellipse tilted at an angle, with the tongue moving in a clockwise direction.

The finding was bolstered by earlier research by other scientists that showed the same chewing pattern in other fish, including bichir (a freshwater fish in Africa), gar, and, importantly, lungfish, which is believed to represent an early stage in the transition of some species from exclusively water- to land-dwelling.

In this paper, Konow and his team studied how the muscles of three mammals acted during chewing: alpacas, goats, and pigs. They outfitted each with electrodes planted in the jaw and tongue muscles to pinpoint the activity of each set of muscles during chewing. The analysis indicated that the animals’ tongues thrust forward, and upward, as they began to chew and then fell back, or retracted, to their original position. With the animals facing left, the tongue traces an ellipse in a counter-clockwise direction for each cycle.

The distinction between fish and mammal chewing is likely there for a reason, Konow said. With fish, the tongue’s function is to transport the food quickly into and through the mouth, where, in many species, an extra set (or sets) of jaws will grind the food. In addition, the tongue moves oxygenated water through the mouth to the gills, helping the fish to breathe.

“That’s why you want to constantly have that inward movement with the tongue,” Konow explained.

Mammals, on the other hand, use their tongues to set the food in the right spot in the mouth to maximize chewing. But even among closely related species, there is a surprising difference: Herbivores, such as alpacas and goats, were less coordinated during chewing than omnivores, represented by the pigs. Cud-chewing animals were not as monotonously rhythmic in their chewing as many would believe.

“It is a puzzling finding,” Konow said. “We think the herbivore needs the bolus (the soft mass of chewed food) to be in a precise place between each chew. So the tongue may be constantly moving around to make sure the bolus is in the right place between chews.”

Next came the task of figuring out where, when and with what species the divergence in chewing emerged. Previous research by Anthony Herrel, a Belgian biologist now based at the Museum National D’Histoire Naturelle in Paris, showed that lizards fire their tongues forward and upward as they begin chewing, just like mammals. The thinking is that the transition likely occurred among amphibians. That makes sense, Konow said, and he plans to look next at amphibian chewing. “They’re still locked to the water for reproduction,” he said. “But you have some that become all terrestrial. And that’s the next step on the evolutionary ladder.”