Top sirloin steaks have been getting a grilling in U.S. Department of Agriculture (USDA) food safety studies. USDA microbiologist John B. Luchanskyand his colleagues are conducting experiments to help make sure that neither the foodborne pathogen Escherichia coli O157:H7 nor any of its pathogenic relatives will ruin the pleasure of eating this popular entrée.
At the Agricultural Research Center's Eastern Regional Research Center, special project team members sample steaks to search for pathogens both before and after cooking on a commercial gas grill. Left to right: technician Brad Shoyer, food technologist Anna Porto-Fett, and microbiologists John B. Luchansky, Vijay Juneja, and Jeffrey Call. 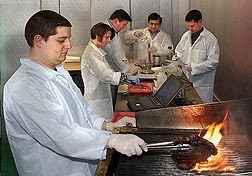 Photo by Paul Pierlott.
The scientists are learning more about the movement of E. coli into "subprimals," the meat from which top sirloin steaks are carved. Their focus is on what happens to the E. coli when subprimals are punctured-as part of being tenderized-and the effect of cooking on survival of those microbes.

In early studies, the researchers applied various levels of E. coli O157:H7 to the "lean-side" surface of subprimals, ran the meat (lean side up) through a blade tenderizer, and then took core samples from 10 sites on each subprimal, to a depth of about 3 inches. In general, only 3 to 4 percent of the E. coli O157:H7 cells were transported to the geometric center of the meat. At least 40 percent of the cells remained in the top 0.4 inch.

Next, the group applied E. coli to the lean-side surface of more subprimals, put the meat through a blade tenderizer, then sliced it into steaks with a thickness of three-fourths of an inch, 1 inch, or 1.25 inches. Using a commercial open-flame gas grill, they cooked the steaks-on both sides-to an internal temperature of 120 degrees Fahrenheit (very rare), 130 degrees F (rare), or 140 degrees F (medium rare).

The findings confirmed that if a relatively low level of E. coli O157:H7 is distributed throughout a blade-tenderized top sirloin steak, proper cooking on a commercial gas grill is effective for eliminating the microbe.

Published in the Journal of Food Protection in 2008 and 2009, these preliminary findings have paved the way to newer investigations. The research enhances food safety, a USDA top priority.
Contacts and sources:
Marcia Wood
United States Department of Agriculture - Research, Education and Economics
on June 29, 2011