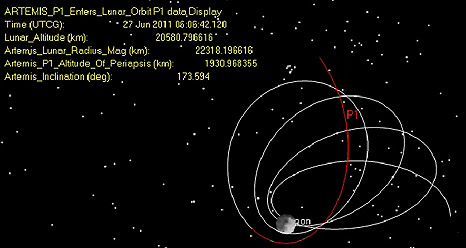 The predicted path for ARTEMIS P1 as it enters lunar orbit.
The first of two ARTEMIS ("Acceleration, Reconnection, Turbulence and Electrodynamics of the Moon’s Interaction with the Sun") spacecraft is now in its lunar orbit.

On June 22, ARTEMIS P1 began firing its thrusters to move out of its kidney-shaped "libration" orbit on one side of the moon, where it has been since January. Three successive maneuvers were used to kick the spacecraft out of its orbit and send it on a trajectory toward the moon.

It continued on that path until June 27 at 10:04 a.m. EDT when the spacecraft was about 2,400 miles from the moon. At that point, flight engineers at UC Berkeley issued the first commands to move it into orbit around the moon. Two more maneuvers helped fine-tune the position, and as of 12:30 p.m. EDT, ARTEMIS P1 is now in lunar orbit.

This is the culmination of a complex, two-year journey that relied predominantly on gravity boosts and used minimal fuel. The path from its orbit around Earth to the moon was developed and orchestrated by engineers at the NASA's Goddard Space Flight Center in Greenbelt, Md., NASA's Jet Propulsion Lab in Pasadena, Calif., and University of California at Berkeley.

The engineers will watch the ARTEMIS P1 orbit closely over the next few days in case additional adjustments are required. Engineers are set to move the second spacecraft, ARTEMIS P2, into position on July 17.

ARTEMIS is the first mission ever to orbit the moon's Lagrangian points – points on either side of the moon where the moon and Earth's gravity balance perfectly. It is also the first to attempt to move from the Lagrangian to lunar orbit.


A simulation of the ARTEMIS P1 entering lunar orbit viewed from the perspective of the spacecraft.