Android From Meteron, Headed For The Mooon

Meet Justin, an android who will soon be controlled remotely by the astronauts in ESA’s Columbus laboratory on the International Space Station. With this and other intriguing experiments like the Eurobot rover, ESA is paving the way for exploring the Moon and planets with tele-operated robots.

The Justin mobile robotic system, developed at the German Aerospace Center, DLR, with its compliant controlled lightweight arms and its two four-fingered hands, is an ideal experimental platform. The mobile platform allows the long-range autonomous operation of the system. The independent wheels respond to the requirements of Justin's upper body during manipulation tasks. Sensors and cameras allow the 3D reconstruction of the robot's environment, enabling Justin to perform his work autonomously. 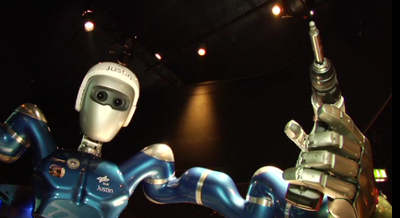 In two to three years, the experimental robot on Earth will faithfully mimic the movements of an astronaut on the Space Station.
The location for ESA's Lunar Robotics Challenge – a competition for student groups remotely driving their rovers – was chosen in 2008 for its crater-like depressions covered with an unusual soil. The pumice pebbles and dust maderover locomotion as difficult as it is expected to be in a real lunar crater. The location's resemblance to a lunar landscape was also a driving factor in its selection. 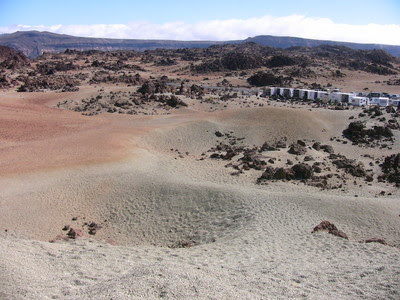 Credits: ESA
By wearing an exoskeleton – a combination of arm and glove with electronic aids to reproduce the sensations a human hand would feel – a distant operator can work as though he were there.
ESA astronaut Christer Fuglesang works with Exoskeleton in the robotics lab at ESTEC. 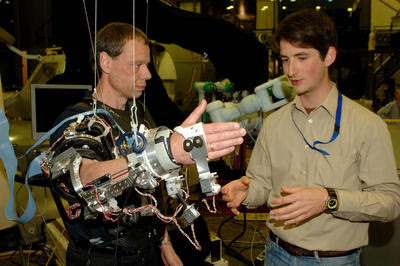 To help turn robotics and telepresence into a standard tool for space missions, ESA is linking the Space Station and Earth for remotely controlling terrestrial robotic experiments from the orbital outpost

ESA astronaut Frank De Winne and NASA astronaut Nicole Stott work the controls of the JEM Robotic Manipulator System in the Japanese Kibo laboratory of the International Space Station. De Winne and Stott used the robot arm to grapple the exposed pallet from the Station's Canadarm2 and berth it to the JEM Exposed Facility / Exposed Facility Unit 10 on 23 September 2009. 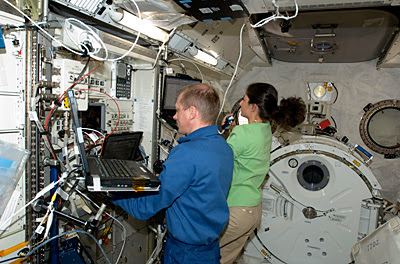 “First we have to set up a robust communication architecture, establish an operations system and define a protocol to allow astronauts, robots and our ESA control centre to work efficiently together. This is not as easy a task as it seems.”

A team of Meteron engineers at ESA's European Space Operations Centre in Darmstadt, Germany, are now testing the communications and operations systems that will enable astronauts on the ISS to control robotic devices on Earth. 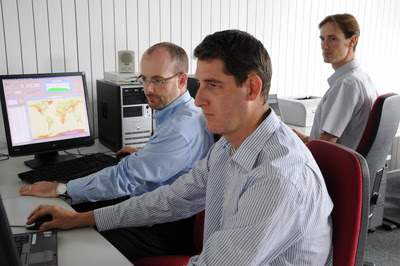 ESA called earlier this year for new ideas for the Space Station to be used as a testbed for exploration missions. Many proposals called for operating ground-based robots from a workstation on the Station.

“The multitude of submissions shows the strength of the idea,” comments Philippe Schoonejans, ESA’s Head of Robotics in the Human Spaceflight and Operations directorate.

As a tool for preparing the METERON communications infrastructure, astronauts will control a communications test robot such as this one, via a control room located at ESA's European Space Operations Centre, Darmstadt. 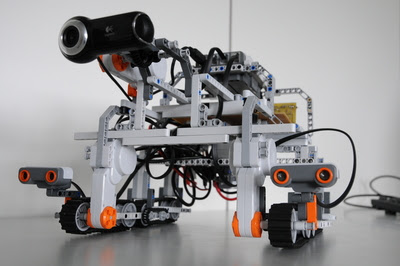 "This allows ESA to take into account all suggested experiments and give opportunities to the countries, companies and institutes who have shown their interest by submitting the idea."

The Eurobot Ground Prototype (EGP) project tests use of robotics in preparation of human arrival and robotic assistance during human presence for exploration missions on the planetary surface. A test under difficult light condifitons is underway in the photo. 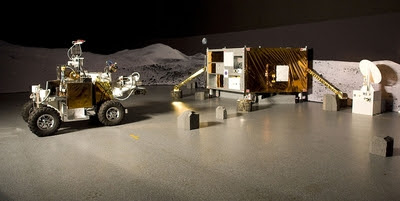 First a rover, then an android
In the first Meteron tests, the Station astronauts will operate ESA’s Eurobot prototype from a computer equipped with special screens and a joystick.

This prototype is a four-wheel rover with two arms, an advanced navigation system, cameras and sensors that has been under testing since 2008 at the Agency’s ESTEC space research and technology centre in the Netherlands.

In the next phase, the engineers will allow astronauts to control a robot with the sense of force and ‘touch’. It can be connected to robots like Justin, developed by the DLR German Aerospace Center.

“With these senses, the astronauts will have a real feeling of the forces that the arms of the robots are experiencing in their environment,” explains André Schiele, in charge of ESA’s Telerobotics & Haptics Laboratory.
The mobile robotic system Justin, developed at german Aerospace Center DLR, with its compliant controlled light weight arms and its two four finger hands is an ideal experimental platform for these research issues. The mobile platform allows the long range autonomous operation of the system. The individually movable, spring born wheels match the special requirements of Justin's upper body during manipulation tasks. Sensors and cameras allow the 3D reconstruction of the robot's environment and therefore enable Justin to perform given tasks autonomously. 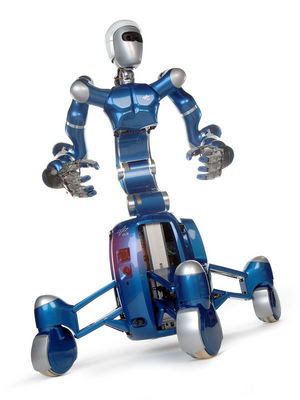