A World Without "Nano"? Soon Hard To Imagine

One nanometer equals 1 billionth of a meter. Strictly speaking nanotechnology uses materials that are no larger than 100 nanometers,

Nanotech is opening up new markets and offering novel solutions to numerous challenges in a very varied range of areas. This was the tenor of the 1st Swiss NanoConvention which took place on May 18 and 19 in Baden. The event was organized by Empa, the Paul Scherrer Institute (PSI) and the ETH Zurich, and offered the 300 or so decision-makers who participated a practical platform on which to discuss and exchange ideas not just about developments in the nanosector which are beneficial to society, but also about the potential risks of the new technology.


Single Walled 2 Nanometer Carbon Nanotube, One of Many Type of Nanomaterials 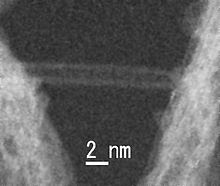 Smart windows which, thanks to a nanocoating, adjust their level of transparency to suit the sun’s brightness, so helping to save energy; novel diagnostic methods and tailor-made nano-medicines to treat HIV and arteriosclerosis;. nanofibers which, on the one hand, can be used to make very efficient dust filters and on the other, thanks to integrated pheromones, protect vineyards from insect attack; new nanostructured materials for making more efficient batteries;. innovative media for storing unimaginably large quantities of computer data – these are just a few of the possible solutions that nanoresearchers are currently developing and which were the topic of animated discussion at the Swiss NanoConvention.

"We need to have significantly more of this kind of events, which bring together the top political and economic personalities, investors and financial experts and representatives of the most outstanding research institutes," commented the head of IBM research, John Kelly. A few days earlier he had inaugurated the new nanoresearch center in Rueschlikon, a joint-venture by IBM and the ETH Zurich in which Empa also has an interest. Asked why IBM had chosen Switzerland as the location for its new nanocenter, he replied "Because this is where the best people are.” As far as IBM’s head of research is concerned, it is clear that a future without nanotechnology in many technical areas is quite unimaginable. "The future of electronic data processing lies in nanotechnology, in combination with a radical new system architecture.”

Progress is taking place on the nanometer scale

“Nano” is making waves in the field of medicine too. According to Patrik Hunziker of the University Hospital Basel, interest is being focused on two particular properties of nanomaterials and systems – their ability to target and home-in on sick organs, tissues or cells without simultaneously triggering an immune response. "This means that the effectiveness of the medication increases about 100-fold while side-effects drop dramatically," said Hunziker. Obviously therapeutic nanomaterials must not harm the patient. "At this moment I would rather not have carbon nanotubes in my body, for example," he commented, adding that quite simply, too little was known about the effects they might have on the human organism.

When only a little data is known in such cases, then unease spreads and the public quickly develop reservations. Surveys show that a large fraction of the public knows little or nothing about nanotechnology. "This is exactly the reason why it is incredibly important for researchers to actively encourage discussions about nanotechnology in society generally," as Thomas Borer, the former Swiss ambassador to Germany and CEO of swiss authentication research and development AG, reminded the audience. After all, he added, it is the general public which in the end determines whether or not a new technology is accepted.

The public’s fears need to be taken seriously

In Switzerland a positive but critical attitude towards nanotechnology reigns, according to Mauro Dell’Ambrogio, the Secretary of State for Education and Research. Even its critics do not dispute the fact that nanotechnology offers solutions to problems in medicine and environmental protection. But the public’s fears should also be taken seriously, and in this context both in Switzerland and in Europe various initiatives are currently in progress where representatives from science and industry, together with consumer and environmental protection organizations, are drafting safety schedules covering the use of various synthetic nanomaterials. This creates a basis which allows industry or the regulatory authorities to make informed decisions on risk reducing measures, when necessary.

Wolf-Michael Catenhusen, the head of the German Federal Environmental Ministry's NanoCommission, was of the opinion that right from the start in the field of nanotechnology, research into the implications of the nanosciences has been an integral part of the development process, taking the form of a stakeholder dialogue. Currently in Germany, a "catalogue" listing both the beneficial and detrimental aspects of nano products and their applications is being created. According to Catenhusen, one of the main reasons why genetic technology met with such little public acceptance was the fact that the industry did not develop a "User Exploitation Strategy". "We really can't afford to make such a serious mistake a second time," Catenhusen maintained.

In order to make the potential which nanotechnology offers accessible to society – while keeping the public fully informed of the possible risks of certain applications – requires efforts by the research community, confirmed Urs Hofmann, a senior executive member of the government of Canton Aargau. This is exactly where the Swiss NanoConvention can make an important contribution, he added. Hofmann emphasized attempts to establish the event as a permanent national forum which would include internationally respected experts. "By holding the Swiss NanoConvention the research community is sending out a strong message – that it is capable of organizing itself in a beneficial way and of unifying its abilities at the national level. This is an important signal which will raise awareness and understanding of nanotechnology and the nanosciences, in particular among the political community.”