A Monash student has made a breakthrough in the field of astrophysics, discovering what has until now been described as the Universe’s ‘missing mass’. Amelia Fraser-McKelvie, working within a team at the Monash School of Physics, conducted a targeted X-ray search for the matter and within just three months found it – or at least some of it.
Dr Jasmina Lazendic-Galloway, Amelia Fraser-McKelvie and Dr Kevin Pimbble 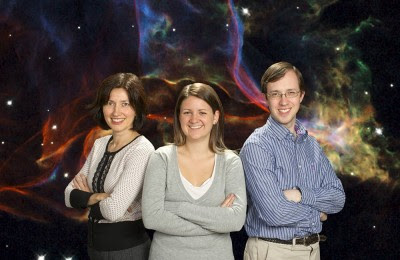 
What makes the discovery all the more noteworthy is the fact that Ms Fraser-McKelvie is not a career researcher, or even studying at a postgraduate level. She is a 22-year-old undergraduate Aerospace Engineering/Science student who pinpointed the missing mass during a summer scholarship, working with two astrophysicists at the School of Physics, Dr Kevin Pimbblet and Dr Jasmina Lazendic-Galloway.
The School of Physics put out a call for students interested in a six-week paid astrophysics research internship during a recent vacation period, and chose Ms Fraser-McKelvie from a large number of applicants. Dr Pimbblet, lecturer in the School of Physics put the magnitude of the discovery in context by explaining that scientists had been hunting for the Universe’s missing mass for decades.

Credit: MPE / Max-Planck-Institut für extraterrestrische Physik / Impressum
“It was thought from a theoretical viewpoint that there should be about double the amount of matter in the local Universe compared to what was observed.  It was predicted that the majority of this missing mass should be located in large-scale cosmic structures called filaments - a bit like thick shoelaces,” said Dr Pimbblet.
Astrophysicists also predicted that the mass would be low in density, but high in temperature - approximately one million degrees Celsius. This meant that, in theory, the matter should have been observable at X-ray wavelengths. Amelia Fraser-McKelvie’s discovery has proved that prediction correct.
Unusual Gas Filaments Surround Galaxy NGC 1275 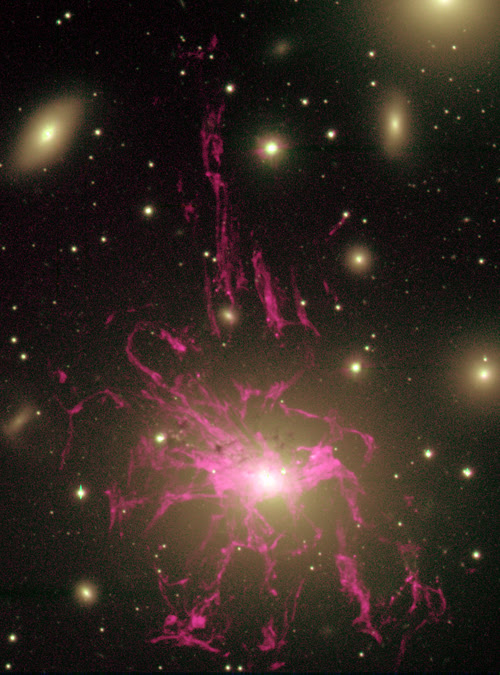 Credit & Copyright: C. Conselice (Caltech), WIYN, AURA, NOAO, NSF
Ms Fraser-McKelvie said the ‘Eureka moment’ came when Dr Lazendic-Galloway closely examined the data they had collected.
“Using her expert knowledge in the X-ray astronomy field, Jasmina reanalysed our results to find that we had in fact detected the filaments in our data, where previously we believed we had not.”
X-ray observations provide important information about physical properties of large-scale structures, which can help astrophysicists better understand their true nature. Until now, they had been making deductions based only on numerical models, so the discovery is a huge step forward in determining what amount of mass is actually contained within filaments.
Still a year away from undertaking her Honours year (which she will complete under the supervision of Dr Pimbblet), Ms Fraser-McKelvie is being hailed as one of Australia’s most exciting young students.  Her work has been published in one of the world’s oldest and most prestigious scientific journals, Monthly Notices of the Royal Astronomical Society.
“Being a published author is very exciting for me, and something I could never have achieved without the help of both Kevin and Jasmina. Their passion and commitment for this project ensured the great result and I am very thankful to them for all the help they have given me and time they have invested,” said Ms Fraser-McKelvie.
Dr Pimbblet said that he had under his tuition a very talented student who excelled in performing the breakthrough research.
“She has managed to get a refereed publication accepted by one of the highest ranking astronomy journals in the world as a result of her endeavours.  I cannot underscore enough what a terrific achievement this is. We will use this research as a science driver for future telescopes that are being planned, such as the Australian Square Kilometre Array Pathfinder, which is being built in outback Western Australian.”
The paper can be found on the Cornell University website.
Source: Monash University
on May 27, 2011