Typhoon Songda became a Super Typhoon in the evening on May 26, 2011 (Eastern Daylight Time) was it reached a Category 5 status on the Saffir-Simpson Scale. NASA satellite data shows that the monster storm with a 14 mile-wide eye has weakened due to adverse wind conditions today and is still a powerful Category 4 typhoon.

This infrared image of Super Typhoon Songda was captured by the AIRS instrument on NASA's Aqua satellite on May 27, 2011, at 5:05 UTC (1:05 a.m. EDT). At this time, Songda was a Category 4 storm. The purple areas indicate very strong thunderstorms with heavy rainfall and there is a large area of them that surround the visible eye. Taiwan is northwest of the storm. 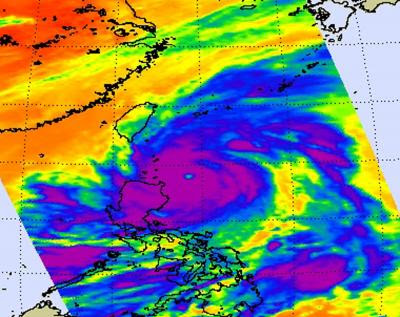 Credit: NASA/JPL, Ed Olsen
The Atmospheric Infrared Sounder (AIRS) instrument on NASA's Aqua satellite captured an infrared image of Super Typhoon Songda on May 27, 2011 at 5:05 UTC (1:05 a.m. EDT). At that time Songda was a Category 4 storm. The infrared image showed a large area of very strong thunderstorms with heavy rainfall surrounding the eye of the storm. The eye is almost 14 miles (12 nm/22 km) in diameter and those thunderstorms were dropping rainfall as much as 2 inches (50 mm) per hour.

AIRS infrared imagery from today shows that the cloud tops are warming, and convection (rapidly rising air that forms the thunderstorms that power a tropical cyclone) is weakening. The rule with infrared imagery and thunderstorms is: the colder the cloud top, the stronger the convection and stronger the thunderstorm. So, what's making Sondga weaken? Cooler sea surface temperatures (now that its north of 20 degrees north latitude) and increasing southwesterly vertical wind shear.

Taiwan is already feeling the effects from Sondga as the surf has kicked up and is expected to remain rough until Sondga passes this weekend. Songda is currently expected to pass just to the east of Ishigakijima island and to the west of Kadena Air Base, putting the island on the strongest side (the northeastern corner) of the storm. Songda is then forecast by the Joint Typhoon Warning Center to continue moving northeast and curving past the east coast of Japan, while its center remains at sea. By May 30, Songda is expected to have passed Japan.