A team of researchers from the Royal Institute and Observatory of the Navy (ROA) in Cádiz (Spain) has developed a method to track the movement of geostationary objects using the position of the stars, which could help to monitor space debris. The technique can be used with small telescopes and in places that are not very dark. 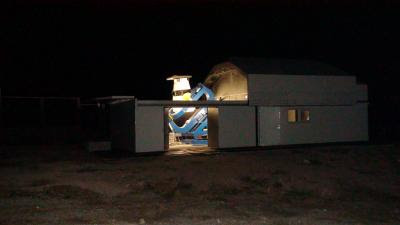 Objects or satellites in geostationary orbit (GEO) can always be found above the same point on the Equator, meaning that they appear immobile when observed from Earth. By night, the stars appear to move around them, a feature that scientists have taken advantage of for decades in order to work out the orbit of these objects, using images captured by telescopes, as long as these images contain stars to act as a reference point.

This method was abandoned when satellites started to incorporate transponders (devices that made it possible to locate them using the data from emitted and reflected signals). However, the classic astrometric techniques are now combing back into vogue due to the growing problem of space waste, which is partly made up of the remains of satellites engines without active transponders.

"Against this backdrop, we developed optical techniques to precisely observe and position GEO satellites using small and cheap telescopes, and which could be used in places that are not particularly dark, such as cities", Francisco Javier Montojo, a member of the ROA and lead author of a study published in the journal Advances in Space Research, tells SINC.

The method can be used for directly detecting and monitoring passive objects, such as the space junk in the geostationary ring, where nearly all communications satellites are located. At low orbits (up to around 10,000 km) these remains can be tracked by radar, but above this level the optical technique is more suitable.

Montojo explains that the technique could be of use for satellite monitoring agencies "to back up and calibrate their measurements, to check their manoeuvres, and even to improve the positioning of satellites or prevent them from colliding into other objects".

"The probability of collisions or interferences occurring between objects is no longer considered unappreciable since the first collision between two satellites on 10 February 2009 between America's Iridium33 and the Russians' Cosmos 2251", the researcher points out.

The team has created software that can precisely locate the centre of the traces or lines that stars leave in images (due to photograph time exposure). The main advantage of the programme is that it "globally reduces" the positions of the object to be followed with respect to the available stellar catalogues. To do this, it simultaneously uses all the stars and all the photographs taken by the telescope's CCD camera on one night. It does not matter if there are not sufficient reference stars in some shots, because they are all examined together as a whole.

Optical observation allows the object to be located at each moment. Using these data and another piece of (commercial) software, it is possible to determine the orbit of the GEO object, in other words to establish its position and speed, as well as to predict its future positions. The method was validated by tracking three Hispasat satellites (H1C, H1D and Spainsat) and checking the results against those of the Hispasat monitoring agency.

"As an additional original application, we have processed our optical observations along with the distances obtained using another technique known as 'double channel' (signals the travel simultaneously between two clocks or oscillators to adjust the time)", says Montojo. The Time Section of the ROA uses this methodology to remotely compare patterns and adjust the legal Spanish time to International Atomic Time.

Incorporating these other distance measurements leads to a "tremendous reduction" in uncertainty about the satellite's position, markedly improving the ability to determine its orbit.

Data from the ROA's veteran telescope in San Fernando (Cádiz) were used to carry out this study, but in 2010 the institution unveiled another, more modern one at the Montsec Astronomical Observatory in Lleida, co-managed by the Royal Academy of Sciences and Arts of Barcelona. This is the Fabra-ROA Telescope at Montsec (TFRM), which makes remote, robotic observations.

"The new telescope has features that are particularly well suited to detecting space junk, and we hope that in the near future it will play an active part in international programmes to produce catalogues of these kinds of orbital objects", the researcher concludes.