The production process, according to inventor John Sydney Robinson,comprises the steps of: (a) increasing the pH of an aqueous solution of the formula MX.sub.3, where M is a trivalent rare earth metal cation and X is a monovalent anion so as to produce a reaction product containing X anions in solution and a precipitate in the form of trivalent rare earth hydroxide nanoparticles of the formula M(OH).sub.3, the nanoparticles having a hexagonal crystal structure; and, (b) ageing the nanoparticles of step (a) in the presence of the reaction product containing X anions in solution so as to cause rod-like anisotropic growth of the nanoparticles and form rare earth hydroxide nanorods.

Ever since the discovery of carbon nanotubes, there has been great interest in the synthesis of 1-dimensional "nanostructures". The rare earth elements are distinguished from other elements by their unique electron configuration which results in them having unique electrical, magnetic, optical and nuclear properties. Nanorods and nanotubes of rare earth oxides have great potential for use in catalyst and fuel cell applications, electronic and optoelectronic nanodevices.

In particular cerium oxide and doped cerium oxide exhibits unique oxygen storage capacity, redox behaviour and ionic conductivity, the extent of which is likely to be dependent upon surface area and lattice structure. As such, considerable interest has surrounded efforts to produce high surface area cerium oxide based particles with unique morphology and high thermal stability. 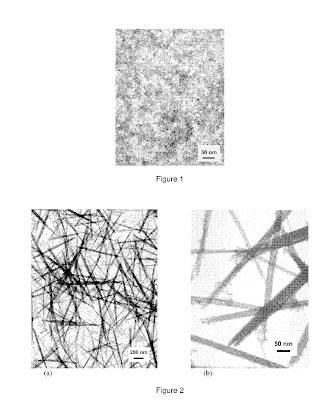 FIG. 2(a) and (b) are transmission electron micrographs at two different magnifications showing nanorods of hydrated cerium oxide as shown in Fig. 1, aged 18 hours in reaction products prior to washing.
For rod-like growth to occur during this ageing step, the trivalent rare earth hydroxide nanoparticles which precipitate from the rare earth salt aqueous solution must have a hexagonal crystal structure. Without wishing to be bound by theory it is understood that the driving force for the anisotropic growth of the hydroxides derives at least in part from the hexagonal crystal structure of these trivalent rare earth hydroxides. Rod-like growth is not observed to occur for every precipitated nanoparticle.