Researchers from the Walter and Eliza Hall Institute have overturned conventional wisdom on how cell movement across all species is controlled, solving the structure of a protein that cuts power to the cell 'motor'. The protein could be a potential drug target for future malaria and anti-cancer treatments.

Researchers (from left) Dr Jake Baum. Mr Wilson Wong and Dr Jacqui Gulbis from the Walter and Eliza Hall Institute in Melbourne, Australia, have upended the theory of how cells grow and move, solving the structure of a protein that cuts power to the cell "motor". The protein could be a potential drug target for future malaria and anti-cancer treatments. 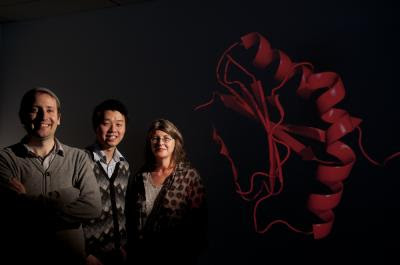 By studying the structure of actin-depolymerising factor 1 (ADF1), a key protein involved in controlling the movement of malaria parasites, the researchers have demonstrated that scientists' decades-long understanding of the relationship between protein structure and cell movement is flawed.

Dr Jake Baum and Mr Wilson Wong from the institute's Infection and Immunity division and Dr Jacqui Gulbis from the Structural Biology division, in collaboration with Dr Dave Kovar from the University of Chicago, US, led the research, which appears in today's edition of the Proceedings of the National Academy of Sciences USA.

Dr Baum said actin-depolymerising factors (ADFs) and their genetic regulators have long been known to be involved in controlling cell movement, including the movement of malaria parasites and movement of cancer cells through the body. Anti-cancer treatments that exploit this knowledge are under development.

A protein diagram shows the structure of the malaria parasite protein ADF1 (actin-depolymerising factor 1) (left) compared to a human ADF (right). The noticeable lack of the 'finger' in malaria parasite ADF1 led researchers from the Walter and Eliza Hall Institute in Melbourne, Australia, to upend the conventional theory of how the protein controlled cell movement. Credit: Dr Jake Baum and Mr Wilson Wong, Walter and Eliza Hall Institute.
"ADFs help the cell to recycle actin, a protein which controls critical functions such as cell motility, muscle contraction, and cell division and signaling," Dr Baum said. "Actin has unusual properties, being able to spontaneously form polymers which are used by cells to engage internal molecular motors – much like a clutch does in the engine of your car. A suite of accessory proteins control how the clutch is engaged, including those that dismantle or 'cut' these polymers, such as ADF1.

"For many years research in yeast, plants and humans has suggested that the ability of ADFs to dismantle actin polymers – effectively disengaging the clutch – required a small molecular 'finger' to break the actin in two," Dr Baum said. "However, when we looked at the malaria ADF1 protein, we were surprised to discover that it lacked this molecular 'finger', yet remarkably was still able to cut the polymers. We discovered that a previously overlooked part of the protein, effectively the 'knuckle' of the finger-like protrusion, was responsible for dismantling the actin; we then discovered this 'hidden' domain was present across all ADFs."

Mr Wong said that the Australian Synchrotron was critical in providing the extraordinary detail that helped the team pinpoint the protein 'knuckle'. "This is the first time a 3D image of the ADF protein has been captured in such detail from any cell type," Mr Wong said. "Imaging the protein structure at such high resolution was critical in proving beyond question the segment of the protein responsible for cutting actin polymers. Obtaining that image would have been impossible without the synchrotron facilities."

A protein diagram shows the structure of the malaria parasite protein ADF1 (actin-depolymerising factor 1). The noticeable lack of the 'finger' led researchers from the Walter and Eliza Hall Institute in Melbourne, Australia, to upend the conventional theory of how the protein controlled cell movement. 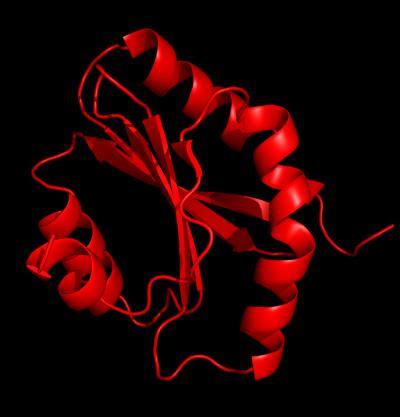 Credit: Dr Jake Baum and Mr Wilson Wong, Walter and Eliza Hall Institute.
Dr Baum said the new knowledge will give researchers a much clearer understanding of one of the fundamental steps governing how cells across all species grow, divide and, importantly, move. "Knowing that this one small segment of the protein is singularly responsible for ADF1 function means that we need to focus on an entirely new target not only for developing anti-malarial treatments, but also other diseases where potential treatments target actin, such as anti-cancer therapeutics," Dr Baum said. "Malaria researchers are normally used to following insights from other biological systems; this is a case of the exception proving the rule: where the malaria parasite, being so unusual, reveals how all other ADFs across nature work."

More than 250 million people contract malaria each year, and almost one million people, mostly children, die from the disease. The malaria parasite has developed resistance to most of the therapeutic agents available for treating the disease, so identifying novel ways of targeting the parasite is crucial.

Dr Baum said that the discovery could lead to development of drugs entirely geared toward preventing malaria infection, without adverse effects on human cells. "One of the primary goals of the global fight against malaria is to develop novel drugs that prevent infection and transmission in all hosts, to break the malaria cycle," Dr Baum said. "There is a very real possibility that, in the future, drugs could be developed that 'jam' this molecular 'clutch', meaning the malaria parasite cannot move and continue to infect cells in any of its conventional hosts, which would be a huge breakthrough for the field."

This project was funded by the National Health and Medical Research Council (NHMRC).

Contacts and sources:
Liz Williams
Walter and Eliza Hall Institute
on May 30, 2011