A new biomaterial designed for repairing damaged human tissue doesn’t wrinkle up when it is stretched. The invention from nanoengineers at the University of California, San Diego marks a significant breakthrough in tissue engineering because it more closely mimics the properties of native human tissue.

A new biomaterial designed for repairing damaged human tissue doesn’t wrinkle up when it is stretched. The invention from nanoengineers at the University of California, San Diego marks a significant breakthrough in tissue engineering because it more closely mimics the properties of native human tissue. Pictured: Optical images of polyethylene glycol scaffolds expanding in response to stretching.(Note: green tone added to image.) 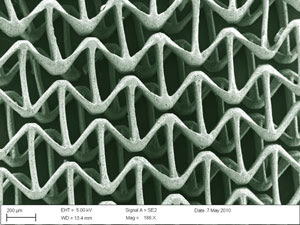 Shaochen Chen, professor in the Department of NanoEngineering at the UC San Diego Jacobs School of Engineering, hopes future tissue patches, which are used to repair damaged heart walls, blood vessels and skin, for example, will be more compatible with native human tissue than the patches available today. His findings were published in a recent issue of the journal Advanced Functional Materials.

The new biomaterial was created using a new biofabrication platform that Chen is developing under a four-year, $1.5 million grant from the National Institutes of Health. This biofabrication technique uses light, precisely controlled mirrors and a computer projection system -- shined on a solution of new cells and polymers -- to build three-dimensional scaffolds with well-defined patterns of any shape for tissue engineering.

“We are also exploring other opportunities,” said Chen. “It’s a new material. I think it’s just a matter of time before more people will pick up and find applications for it in defense, energy and communications, for instance.” Although Chen’s team is focused on creating biological materials, he said the manufacturing technology could be used to engineer many other kinds of materials including metal parts used in ships and spacecraft, for example.

Shape turned out to be essential to the new material’s mechanical property. While most engineered tissue is layered in scaffolds that take the shape of circular or square holes, Chen’s team created two new shapes called “reentrant honeycomb” and “cut missing rib.” Both shapes exhibit the property of negative Poisson’s ratio (i.e. not wrinkling when stretched) and maintain this property whether the tissue patch has one or multiple layers. One layer is double the thickness of a human hair, and the number of layers used in a tissue patch depends on the thickness of the native tissue that doctors are trying to repair. A single layer would not be thick enough to repair a heart wall or skin tissue, for example. The next phase of research will involve working with the Department of Bioengineering at the Jacobs School of Engineering to make tissue grafts to repair damaged blood vessels.

Contacts and sources:
UCSD Jacobs School of Engineering Department of NanoEngineering
Story by Catherine Hockmuth
on May 29, 2011