Scientists from Finland and France have developed a new synchrotron X-ray technique that may revolutionize the chemical analysis of rare materials like meteoric rock samples or fossils. The results have been published on 29 May 2011 in Nature Materials as an advance online publication.

A diamond surrounded by air, and a glass of water. Both contain carbon and oxygen. If they are embedded inside another object, without access for a chemical probe, it is a difficult task to distinguish between even simple chemical bonds. A new synchrotron X-ray technique has made this now possible. 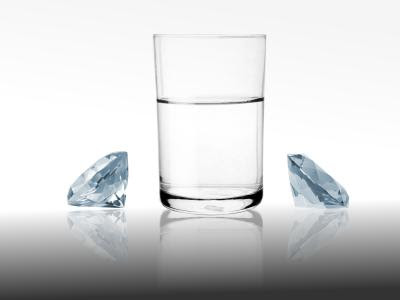 Life, as we know it, is based on the chemistry of carbon and oxygen. The three-dimensional distribution of their abundance and chemical bonds has been difficult to study up to now in samples where these elements were embedded deep inside other materials. Examples are tiny inclusions of possible water or other chemicals inside martian rock samples, fossils buried inside a lava rock, or minerals and chemical compounds within meteorites.

X-ray tomography, which is widely used in medicine and material science, is sensitive to the shape and texture of a given sample but cannot reveal chemical states at the macroscopic scale. For instance graphite and diamond both consist of pure carbon, but they differ in the chemical bond between the carbon atoms. This is why their properties are so radically different. Imaging the variations in atomic bonding has been surprisingly difficult, and techniques for imaging of chemical bonds are highly desirable in many fields like engineering and research in physics, chemistry, biology, and geology.

The European Synchrotron Radiation Facility (ESRF) is located in Grenoble, France. The experiments were performed using beams of X-rays provided by one of the world's most brilliant light sources. 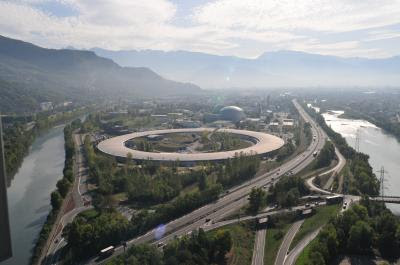 Now an international team of scientists from the University of Helsinki, Finland, and the European Synchrotron Radiation Facility (ESRF), Grenoble, France, has developed a novel technique that is suitable exactly for this purpose. The researchers use extremely bright X-rays from a synchrotron light source to form images of the chemical bond distribution of different carbon forms embedded deep in an opaque material; an achievement previously thought to be impossible without destroying the sample.

"Now I would love to try this on Martian or moon rocks. Our new technique can see not only which elements are present in any inclusions but also what kind of molecule or crystal they belong to. If the inclusion contains oxygen, we can tell whether the oxygen belongs to a water molecule. If it contains carbon, we can tell whether it is graphite, diamond-like, or some other carbon form. Just imagine finding tiny inclusions of water or diamond inside martian rock samples hidden deep inside the rock", says Simo Huotari from the University of Helsinki.

The newly developed method will give insights into the molecular level structure of many other interesting materials ranging, for example, from novel functional nanomaterials to fuel cells and new types of batteries.

The left part of the image shows a photograph of the sample, measuring approximately 7 x 10 x 5mm3. The part studied with X-rays was the indicated subvolume of 7 x 2 x 1mm3. The result, a detailed 3D map of chemical bonds, is visualised here as a 2-D cut through the subvolume, shown on the right, where the different colors represent the different chemical carbon bonds present in the sample. 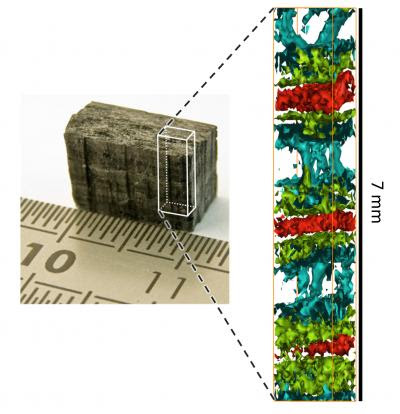 Simo Huotari is the corresponding author of the publication.