Predicting the exact dispersal of a volcanic ash cloud is never going to be easy. However, satellite data are showing that the eruption from Iceland's Grímsvötn volcano this week was unlikely to have posed a significant threat to airspace over central Europe.

The Icelandic Met Office reports that eruption from Grímsvötn has subsided and that there is now virtually no ash being produced from the volcano.

This major eruption began during the evening of 21 May and led to the disruption of around a thousand flights across Europe.

Although this is minor compared to the chaos caused last year when Eyjafjallajoekull erupted, satellite data are showing that this week's eruption did not pose a serious threat to aircraft flying over central Europe.

Satellite measurements offer an excellent means with which to follow the spread, extension, concentration and movement of volcanic plumes.

The most useful information is provided by satellites in geostationary orbit, such as the Meteosat series operated by Eumetsat, as they deliver data every 15 minutes.


The ash cloud north of Scotland as observed by the MERIS instrument on ESA's Envisat satellite. 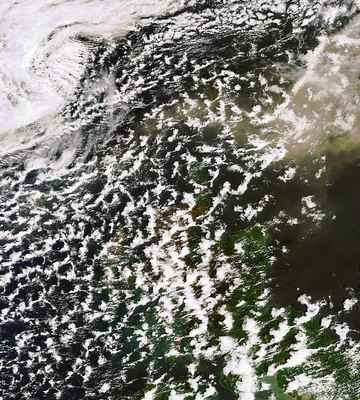 The animation at the top, produced by the Royal Netherlands Meteorological Institute KNMI, uses data from the Spinning Enhanced Visible and Infrared Imager (SEVIRI) on Europe's MSG-2 satellite.

It shows how the ash cloud spewed from Grímsvötn drifted towards Scotland and Scandinavia over the last few days.

Measurements from polar-orbiting satellites are confirming these findings.

The MERIS optical instrument on ESA's Envisat satellite captured the position of the ash cloud close to Scotland on 24 May. These images are consistent with the data observed by the SEVIRI.

The Grímsvötn ash plume can be followed using aerosol information from the Sciamachy instrument on ESA's Envisat satellite. This animation shows the dispersal between 22 and 25 May.

Models that used satellite data to predict the path of the ash cloud earlier this week, such as that produced by the Norwegian Institute for Air Research NILU, have shown to be in line with spaceborne observations over the last few days.

The animation, produced on 23 May, shows the forecast positions of volcanic ash (total column in units of g/m2) from 20:00 GMT on 21 May to 06:00 on 27 May from the Grímsvötn volcanic eruption. The emission source varies in time and assumes a uniform height profile up to the reported plume heights measured by radar. It is also constrained by total fine ash mass determined by satellite.