Product designers harness time-consuming procedures in prototype construction. Only then are they able to assess the results of their work in a comprehensive manner. In a three-dimensional model world, they are able to do so instantly and can experience how the product fits into its natural surroundings. Design alterations can be visualized immediately, saving time and cutting the costs associated with the development process.

With her cyber-gloves the researcher is able to navigate and to modify superimposed simulation or infrastructural data. Unlike a CAVE, which needs a special building, the FRAVE can be brought to the place where it is needed. 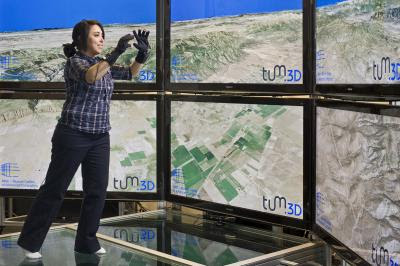 Credit: Andreas Heddergott / TUM
Up to now, the so-called CAVE has been used. This consists of between three and six projection surfaces that create a walk-in space. Video projectors are used to visualize the calculations and applications in real time and in 3D. The nearly-closed space allows for intense immersion in virtual reality.

The FRAVE also offers this degree of so-called immersion. However, it is capable of even more: it can be used in a variety of ways thanks to its flexible, modular structure. "An engineer wants to enter the 3D world to be able to envisage the interior design of a vehicle. A researcher wants to visualize his or her measurement or simulation data, while a manager uses it as a presentation space," as Dr. Marcus Tönnis, scientist at the TU München Faculty of Informatics explains.

The FRAVE is made up of ten plasma screens with a screen diagonal of 65 inch which can be arranged in different ways. When they form a floor and an enclosure on three sides, the user is immersed deep in a virtual explorative world. The screens at the sides can be opened wide, with a tracking system on the screens automatically adapting the image display to the movement of the side sections. The side sections can even be disconnected from the system entirely. "In a meeting, I can simply push the screens up to the table to demonstrate a 3D view. In this way, the system comes to users and not the other way round," says Tönnis.

As the FRAVE consists of end user devices, it is significantly less expensive than the CAVE, an advantage that could promote more widespread use of Virtual Reality Systems. Another important benefit of the FRAVE is its a smaller footprint. Since the CAVE normally uses back projection, a lot of room is needed behind the projection surfaces. It requires at least 8 x 8 x 8 meters, while a space of 3 x 3 x 3 meters is sufficient for the FRAVE, thereby facilitating installation and relocation.

Researchers at the TUM Faculty of Informatics use the FRAVE to view simulation data. For example, the landscape of Saudi Arabia is displayed virtually as part of a project being run in collaboration with the King Abdullah University of Science and Technology (KAUST). Unlike existing virtual globes, like Google Earth, this system is able to show images above and below the earth's surface. As part of another joint research project, the FRAVE is being used to simulate CO2 separation and storage processes in order to optimize crude oil extraction.