Edward Teach (c. 1680 – 22 November 1718), better known as Blackbeard, was a notorious English pirate who operated around the West Indies and the eastern coast of the American colonies.
Teach was most likely born in Bristol, although little is known about his early life. In 1716 he joined the crew of Benjamin Hornigold, a pirate who operated from the Caribbean island of New Providence. He quickly acquired his own ship, Queen Anne's Revenge, and from 1717 to 1718 became a renowned pirate. His cognomen, Blackbeard, was derived from his thick black beard and fearsome appearance; he was reported to have tied lit fuses under his hat to frighten his enemies.
After parting company with Hornigold, Teach formed an alliance of pirates and with his cohort blockaded the port of Charleston, South Carolina. He successfully ransomed its inhabitants and then soon after, ran his ship aground on a sandbar near Beaufort, North Carolina. Teach accepted a royal pardon but was soon back at sea, where he attracted the attention of the Governor of Virginia, Alexander Spotswood. Spotswood arranged for a party of soldiers and sailors to find and capture the pirate, which they did on 22 November 1718. During a ferocious battle, Teach was killed by a small force of sailors led by Lieutenant Robert Maynard.
Edward Teach known as Blackbeard, Engraving 1736 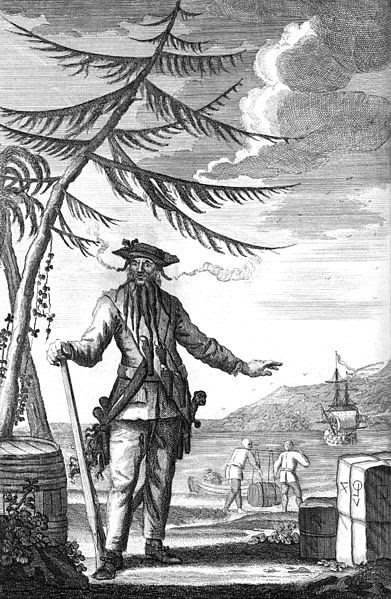 A shrewd and calculating leader, Teach avoided the use of force, relying instead on his fearsome image to elicit the response he desired from those he robbed. Contrary to the modern-day picture of the traditional tyrannical pirate, he commanded his vessels with the permission of their crews and there are no known accounts of his ever having harmed or murdered those he held captive. He was romanticised after his death, and became the inspiration for a number of pirate-themed works of fiction across a range of genres.

Get a behind-the-scenes look at the ‘Wet Lab” where the conservation work on the Queen Anne’s Revenge is being done on a daily basic. Hear from an expert on the various techniques used to bring the past back to life.

After resting on the floor of the Atlantic Ocean since 1718, the anchor is being recovered-weather permitting-on Friday through the Queen Anne’s Revenge Shipwreck Project of the N.C. Department of Cultural Resources Underwater Archaeology Branch.  The anchor will be brought up to the decks of the R/VDan Moore, Cape Fear Community College vessel, and will be offloaded at the State Port at Morehead City.  After the public viewing at the Crystal Coast Visitor Center it will be transported to the QAR Conservation Lab at East Carolina University in Greenville.
Anchor From Queen Anne's Revenge, Blackbeard's Ship

Credit: N.C. Department of Cultural Resources Underwater Archaeology Branch
More photos here: http://www.archaeology.ncdcr.gov/ncarch/UAB/UABindex.html
and here: http://www.flickr.com/photos/ncculture/sets/72157626514610831/
In June 1718, Blackbeard ran the vessel aground after a successful blockade of the Charleston harbor. The shipwreck was located in 1996 by Intersal, Inc. of Florida by Operations Director Mike Daniel through research provided by Intersal President Phil Masters. 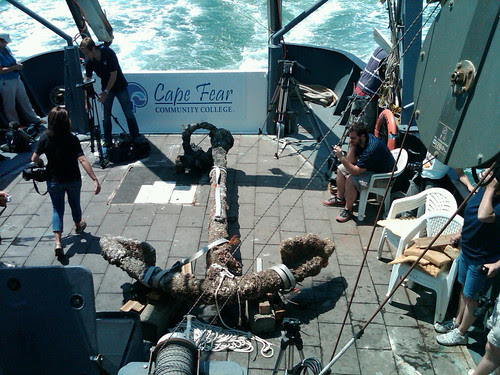 
“The most comprehensive exhibit of Queen Anne’s Revenge material to date will open at the N.C. Maritime Museum on Jun 11.  The exhibit entails the complete renovation and redesign of over one third of the Museum’s exhibit space,” said Director Joseph Schwarzer, of the N.C. Maritime Museums.
For additional information on the project visithttp://news.ncdcr.gov/2011/05/18/queen-annes-revenge.
The Queen Anne’s Revenge Shipwreck Project, Underwater Archaeology Branch, and N.C. Maritime Museums are within the Office of Archives and History in the N.C. Department of Cultural Resources, the state agency with the mission to enrich lives and communities, and the vision to harness the state’s cultural resources to build North Carolina’s social, cultural and economic future. Information is available 24/7 at www.ncculture.com.
There will be a public viewing of a nearly 3,000 pound anchor that belonged to Blackbeard’s flagship, Queen Anne’s Revenge, on Friday, May 27, 1:30 p.m. at the Crystal Coast Visitor Center, 3409 Arendell Street, Morehead City, NC 28557.  Interested people may call the center toll free at (888) 786-6962 or locally at (252) 726-8148.
on May 27, 2011