This image shows the radar reflectivity from the National Weather Service Doppler Radar in Birmingham, Ala. at 5:10 p.m. CDT on April 27, 2011, as a supercell thunderstorm moved across the city. The radar reflectivity is overlaid upon Advanced Spaceborne Thermal Emission and Reflection Radiometer, or ASTER, satellite data acquired on May 4, 2011, showing the damage track resulting from for the EF-4 tornado associated with the storm as it passed through the city and continued northeast toward Birmingham, Ala.

The complex pattern of ASTER data indicate variability in land use characterized by colors in this three-channel composite. Here, the ASTER data shows the tornado damage scar -- aqua in color -- left by the violent tornado as damage disrupts other, more typical land use patterns, while radar data shows the classic "hook echo" signature associated with the rotating storm updraft. On the lower end of the hook is a round region of enhanced radar reflectivity -- near the Interstate 359 marker -- associated with the surface debris lofted by the tornadic winds. This "debris ball" signature corresponds to the ASTER tornado damage track in this and subsequent radar images. 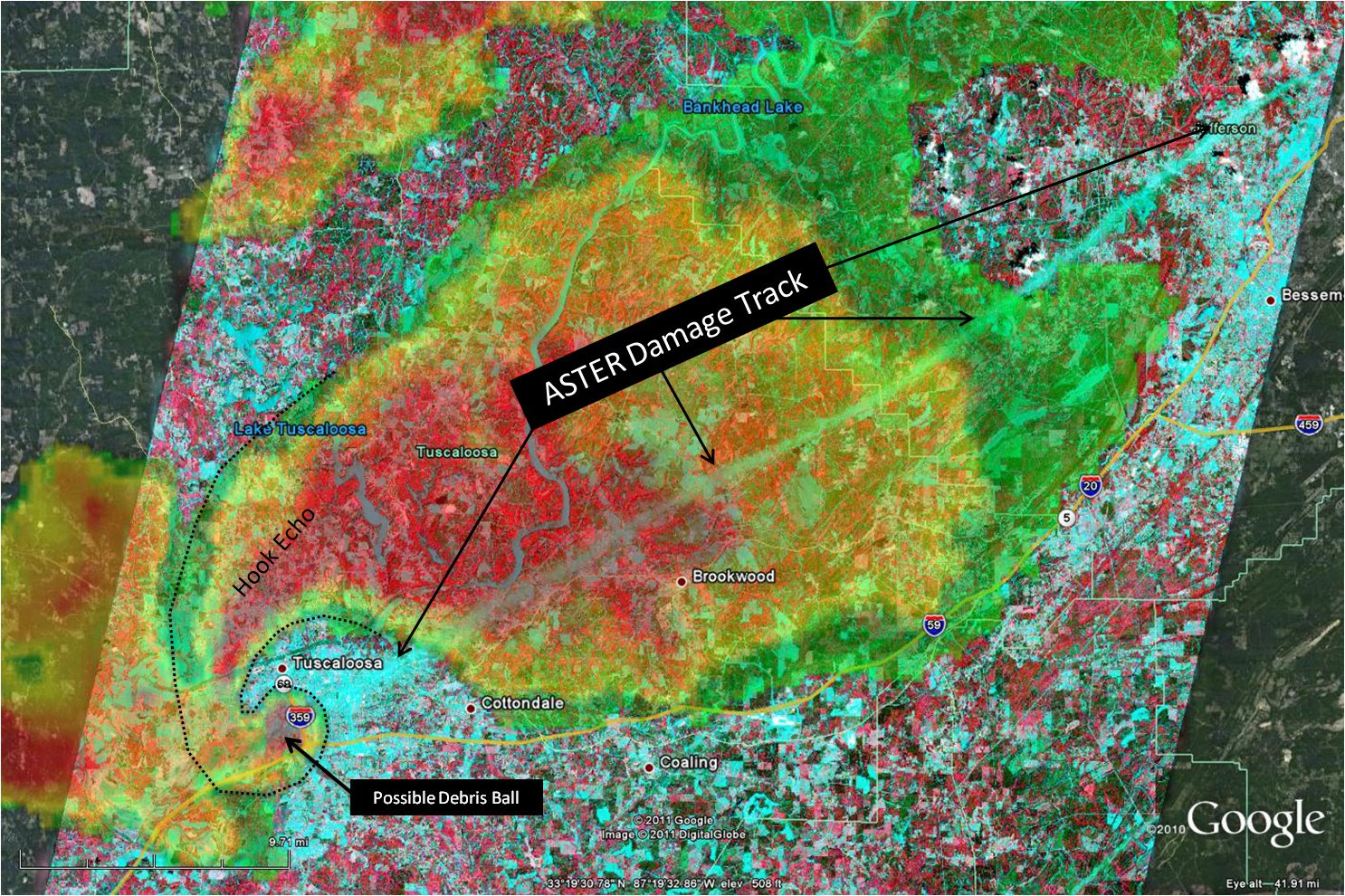 Similar to the radar and satellite composite imagery provided for the Tuscaloosa, Ala. tornado, this image from Phil Campbell, Ala. shows radar reflectivity from the National Weather Service Doppler Radar at Columbus Air Force Base, Miss. at 3:33 p.m. CDT as a strong supercell departed Marion County, Ala. and entered Franklin County, Ala. As in the Tuscaloosa case, the “hook echo” signature is apparent with enhanced radar reflectivity along the damage scar indicated by Advanced Spaceborne Thermal Emission and Reflection Radiometer, or ASTER satellite data, likely corresponding to lofted debris. Damage in the Phil Campbell area was rated as an EF-5 and continued northeast before weakening slightly in the Mount Hope, Ala. area. The damage scar continues southwest into Marion County, Ala., through the community of Hackleburg, Ala. -- not shown -- and further to the northeast as the storm continued into southwestern Lawrence County, Ala.