Evergreen International Aviation, Inc. (McMinnville, OR) in U.S. Patent Application 20100314496 reveals an enhanced aerial delivery system that addresses issues raised when large quantities of fluids, powders, and other agent materials are to be transported in and aerially dispersed by aircraft.
In certain cases including fire fighting, weather control, decontamination exercises, and geotechnical applications, it is desirable for large quantities of materials to be dispersed with each trip of the aircraft since areas for dispersion of the materials can be vast, travel distances between receiving and dispersion points can be great and response time to complete a job can be demanding. These and other applications where large quantities of materials are to be aerially dispersed present particular issues regarding aircraft control, safety and other issues that unfortunately conventional approaches have not addressed.
According to inventors John C. Hale, Christopher B. Harris and William D. McCune, some aspects include positioning and securing of tanks aboard the aircraft to facilitate management and safety of the tanks and aircraft. Other aspects address coupling of the tanks and associated piping to lessen structural effects upon the aircraft. Further aspects deal with channeling, containing, and dumping stray agent materials that have escaped from the agent tanks on board the aircraft.
A tank circuit 100 is shown in FIG. 1 to include a set of propellant tanks 102, a proximate propellant tank 104, and a set of agent tanks 106. The propellant tanks 102 can supply propellant, such as compressed air, through high pressure propellant piping 108 while the tank circuit 100 is within accessible distance of an air supply generally on the ground at a servicing airport (not shown). A condensate piping 110 is used to carry off condensate from the set of the propellant tanks 102 generally also during a servicing period when the tank circuit 100 is not airborne at a servicing airport.
FIG. 1 is a schematic view of an enhanced aerial delivery system. 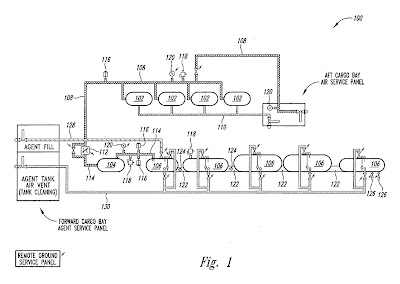 The propellant can be pressurized at different pressures to match requirements of different materials contained in different ones of the agent tanks 106. These materials to be stored in the agent tanks 106 include, but are not limited to, water, gels, powders, chemicals and biological agents used for decontamination, neutralization, weather modification, oil spill treatment and firefighting. The specific agent material is directed by pressurized propellant and is propelled through the outlet tubes 148 straight down or at a forward angle away from the aircraft at variable pressures.
Ejected material can strike or interact with its intended target either with forward direction or slow into a rain-like state dependant on which pressures and altitudes are used. The propellant tanks 102 can store pressurized air or other gas as the propellant. The stored air (energy) is the propulsion system allowing fluid and/or materials to exit the aircraft. The propellant tanks 102 can be pressurized with bleed air from the airplane, air from an onboard compressor, or air from a ground supply. The agent tanks 106 are able to withstand any pressure delivered from the proximate propellant tank 104.

Use of large aircraft, such as a Boeing 747, affords greater material carrying capacity so that large amounts can be dumped onto substantial areas of land at high concentrations given the configurations described above. To handle large volume deliveries, the outlet tubes are sized with relatively large pipe diameters such as having  inch diameters in some implementations. With large pipe diameters for the outlet tubes  and substantially high pressure levels for the propellant tanks , such as 65 psi, a substantial amount of thrust induced force can result from the material in the material storage agent tanks  being shot out from the large diameter outlets at high pressure.
FIG. 3 is a side elevational view of the enhanced delivery system 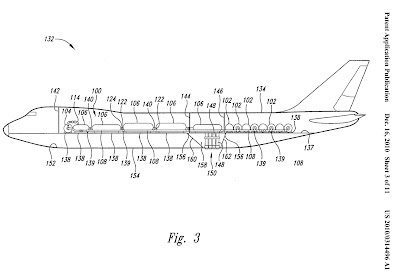 Possible agents used in the tank circuits  can include those for fire fighting, such as used by a "fire bomber", for chemical decontamination, weather modification and oil spill decontamination, among other uses. The tank circuits  and outlet assembly  for use with a Boeing 747 can drop approximately 25,000 gallons of fluid in approximately 5 seconds from an altitude of approximately 2,500 feet above the ground.
FIG. 6 is a further enlarged fragmentary side elevational view of the enhanced delivery system 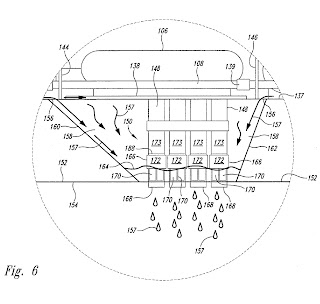