NASA's Tropical Rainfall Measuring Mission and Aqua satellite provided forecasters some insights into the behavior of Super Typhoon Songda over the past weekend. Former Super typhoon Songda brought rainfall to parts of Japan over the weekend and today marine warnings for high surf remain in several Sub-prefecture regions as extra-tropical depression Sondga's remnants push further out to sea.

This image of Typhoon Sondga's rainfall was captured by NASA's TRMM satellite on Saturday, May 28. Notice that the outer fringes of the storm brushed by Taiwan (left). The strongest rainfall (about 2 inches/50 mm per hour) appears in red. The yellow and green areas are moderate rainfall falling at a rate between .78 and 1.57 inches (20 and 40 mm) per hour. 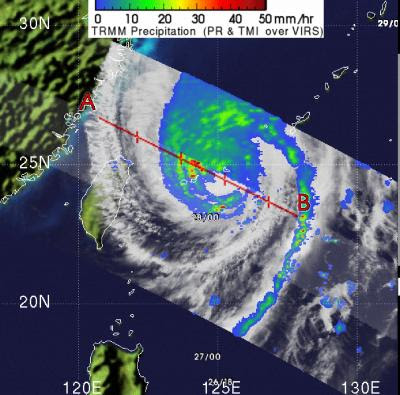 Sub-prefecture regions of Nemuro Chiho, Kushiro Chiho, and Tokachi Chiho still have high wave advisories in place today, May 31, 2011, from the Japanese Meteorological Agency as Sondga's remnants continue moving into the open waters of the Northwestern Pacific Ocean.

On Sunday, May 30, BBC News reported that as Songda continued its northeasterly journey past Japan, the work at the Fukushima nuclear plant was suspended until the storm had passed.

Earlier, Songda made landfall over the Wakayama prefecture and weakened. It then reemerged over water and moved east-northeast while transitioning into an extra-tropical storm.

According to Stars and Stripes newspaper, the Kadena Air Base (island) issued an "all clear" on Sunday May 29 at 7:56 a.m. local/Japan time for most areas of Okinawa. Down powerlines were reported at Marine Corps Air Station Futenma due to downed power lines.

At that time, Songda's center was just 60 miles (96 km) west of Kadena Air Base, Japan, so its center did not cross the island. At that time its maximum sustained winds around the low-level center were near 75 knots (86 mph/139 kmh) and it was still a Category 1 typhoon. It was generating very rough seas at the time reported wave heights were near 37 feet (~11 meters).

Typhoon Sondga's rainfall was captured by NASA's TRMM satellite on Saturday, May 28 at 0613 UTC (1:13 a.m. EDT). At that time, the outer fringes of the storm brushed by Taiwan. The strongest rainfall (about 2 inches/50 mm per hour) remained at sea and was mostly confined to the northwestern quadrant of the storm. Most of the rainfall in the storm was moderate, falling at a rate between .78 and 1.57 inches (20 and 40 mm) per hour.

Stars and Stripes newspaper reported that before Songda approached Kadena Air Base the "Navy's 7th Fleet has moved assets out of port at Yokosuka Naval Base. That fleet included a number of ships including flagship USS Blue Ridge and four destroyers: Fitzgerald, McCain, Mustin and Curtis Wilbur." The newspaper reported that two vessels stayed in port for maintenance and others at sea shifted their navigation away from the storm.

The Moderate Resolution Imaging Spectroradiometer (MODIS) instrument onboard NASA's Aqua satellite captured a visible image of Songda on May 27 at 05:10 UTC (1:10 a.m. EDT) when it was a super typhoon off shore from the northern Philippines. At that time, Songda still had an eye.

By 17:11 UTC (1:11 p.m. EDT) another satellite image showed a changing story. At that time, an infrared image was taken by the Atmospheric Infrared Sounder (AIRS) instrument onboard NASA's Aqua satellite as Songda's center was parallel to the southern tip of Taiwan, but far to the east at Sea. At that time, the eye was no longer visible in this image, indicating that the storm is weakening. Fortunately increased wind shear kicked up and continued weakening the storm by the time it approached Kadena Air Base.

One aspect of the infrared imagery that was impressive is the extent of the clouds connected to Songda. The infrared imagery shows what looks like a tail of clouds extending to the northeast that stretches from Taiwan into northern Japan.