The Deepwater Horizon oil spill of 2010 devastated the Gulf of Mexico ecologically and economically. However, a new study published in Conservation Letters reveals that the true impact of the disaster on wildlife may be gravely underestimated. The study argues that fatality figures based on the number of recovered animal carcasses will not give a true death toll, which may be 50 times higher than believed.

The oil slick as seen from space by NASA'sTerra satellite on May 24, 2010 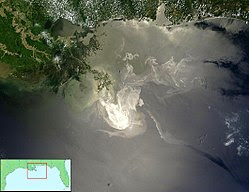 "The Deepwater oil spill was the largest in US history, however, the recorded impact on wildlife was relatively low, leading to suggestions that the environmental damage of the disaster was actually modest," said lead author Dr Rob Williams from the University of British Columbia."This is because reports have implied that the number of carcasses recovered, 101, equals the number of animals killed by the spill."

The team focused their research on 14 species of cetacean, an order of mammals including whales and dolphins. While the number of recovered carcasses has been assumed to equal the number of deaths, the team argues that marine conditions and the fact that many deaths will have occurred far from shore mean recovered carcasses will only account for a small proportion of deaths.

To illustrate their point, the team multiplied recent species abundance estimates by the species mortality rate. An annual carcass recovery rate was then estimated by dividing the mean number of observed strandings each year by the estimate of annual mortality.

The team's analysis suggests that only 2% of cetacean carcasses were ever historically recovered after their deaths in this region, meaning that the true death toll from the Deepwater Horizon disaster could be 50 times higher than the number of deaths currently estimated.

"This figure illustrates that carcass counts are hugely mis-leading, if used to measure the disaster's death toll," said co-author Scott Kraus of the New England Aquarium "No study on carcass recovery from strandings has ever recovered anything close to 100% of the deaths occurring in any cetacean population. The highest rate we found was only 6.2%, which implied 16 deaths for every carcass recovered."

The reason for the gulf between the estimates may simply be due to the challenges of working in the marine environment. The Deepwater disaster took place 40 miles offshore, in 1500m of water, which is partly why estimates of oil flow rates during the spill were so difficult to make.

"The same factors that made it difficult to work on the spill also confound attempts to evaluate environmental damages caused by the spill," said Williams. "Consequently, we need to embrace a similar level of humility when quantifying the death tolls."

If the approach outlined by this study were to be adopted the team believe this may present an opportunity to use the disaster to develop new conservation tools that can be applied more broadly, revealing the environmental impacts of other human activities in the marine environment.

"The finding that strandings represent a very low proportion of the true deaths is also critical in considering the magnitude of other human causes of mortality like ship strikes, where the real impacts may similarly be dramatically underestimated by the numbers observed" said John Calambokidis, a Researcher with Cascadia Research and a co-author on the publication.

"Our concern also applies to certain interactions with fishing gear, because there are not always systematic data with which to accurately estimate by-catch, especially for large whales", noted Jooke Robbins, a co-author from the Provincetown Center for Coastal Studies. "When only opportunistic observations are available, these likely reflect a fraction of the problem."

"While we did not conduct a study to estimate the actual number of deaths from the oil spill, our research reveals that the accepted figures are a grave underestimation," concluded Dr. Williams. "We now urge methodological development to develop appropriate multipliers so that we discover the true cost of this tragedy."