Just like snowflakes, no two people are alike, even if they're identical twins according to new genetic research from The University of Western Ontario. Molecular geneticist Shiva Singh has been working with psychiatrist Dr. Richard O'Reilly to determine the genetic sequencing of schizophrenia using identical or monozygotic twins. The study is published in this month's PLoS ONE.

Molecular geneticist Shiva Singh of the University of Western Ontario found no two people are alike, even if they're identical twins. Singh is studying the genetic determinants of schizophrenia. 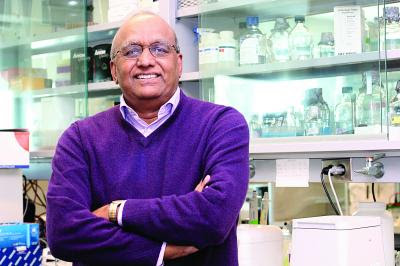 Singh looked at about one million markers of identical twins (and their two parents) where only one twin had schizophrenia. "The most informative feature of schizophrenia is that it sometimes runs in the family. So, for example, the risk of developing schizophrenia is much higher if your brother, sister, mother or father have the disease," says Singh, noting in the general population about one percent have schizophrenia. "We started with the belief that monozygotic twins are genetically identical, so if one member of identical twins has schizophrenia, then the risk for the other twin should be 100 percent, if it's all due to genes. However, studies over the years have shown that the risk of the disease in both twins is only 50 percent." That means either the twins are genetically not identical or the familial disease involves non-genetic (random) effects.

Singh and his team have now demonstrated that the monozygotic twins are not genetically identical. "So if schizophrenia is in the genes, then the difference in the genetic makeup of monozygotic twins, with only one disease twin, must have something to do with the disease." Singh found about 12 per cent of DNA can vary across individuals, "Cells are dividing as we develop and differentiate. More importantly, these cells may lose or acquire additional DNA. The genome is not static."

Dr. O'Reilly hopes this research will lead to better understanding and improved treatments for schizophrenia. "If we had a genetic test for schizophrenia, it could be applied early in the disease when it's hard to make that diagnosis," says Dr. O'Reilly.