A new air-quality measuring instrument invented by Pat Arnott and Ian Arnold of the University of Nevada, Reno that is more economical, more portable and more accurate than older technologies has been licensed for commercial development by Droplet Measurement Technologies of Boulder, Colo. The new device is licensed for commercial development through technology transfer office

Arnott, a physics professor in the University's College of Science, had perhaps lugged his heavy pieces of equipment one too many times through airports to faraway places to examine airborne particles. Now, his and Arnold's latest invention has reduced the laser-equipped air-monitoring equipment to suitcase size, while enhancing its measurement capabilities.

Physics professor Pat Arnott of the University of Nevada, Reno explains the new technology for photoacoustic air particle monitoring recently licensed by the University to Droplet Measurement Technologies. The device is used to measure air quality, including black carbon, in a number of applications. 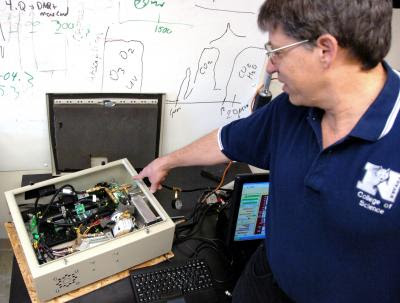 This latest, compact version of the photoacoustic particle measuring machine with its lasers, mirrors, flexible tubes, wires and relays is also cheaper and faster and should be an attractive alternative for users.

"This machine will be much more ubiquitous for measuring air quality, or more precisely, black carbon in the air, or a number of other uses," Arnott said. "Key component cost and instrument weight have dropped from $2,000 and 180 pounds to $40 and 20 pounds. This will make it more accessible to researchers, businesses and government agencies; and much easier when traveling around the world to gather data."

Over the past 12 years, Arnott, along with collaborators from the Desert Research Institute, have mapped air pollution on Los Angeles freeways, as well as in Mexico City, the rain forests of Brazil, Vancouver, B.C., and Big Bend National Park, to name a few locations. They have also worked 1,600 feet underground in an active Nevada gold mine to monitor air quality.

Arnott's invention is an improvement on earlier technology he developed with partners. Arnott, John Walker and Hans Moosmüller, all at the time with DRI, commercialized the first version of the instrument with Droplet Measurement Technologies in 2005.

The University of Nevada, Reno's Tech Transfer Office, worked out the deal with DMT to commercialize the technology.

"The new device is a smaller, less expensive photoacoustic instrument for measuring airborne particles related to air quality that makes it affordable for a broader range of uses and it promises to lead to much wider market adoption of photoacoustic technology," said Ryan Heck, director of the University's Tech Transfer Office. "Pat and DMT have worked together for years, and we were pleased to help facilitate a new product based on their collaboration."

Arnott and DMT have already built beta-versions of the device that are in use by researchers at the Lawrence Berkeley Labs and the Bay Area Air Quality District, at the Max Planck Institute for Chemistry in Europe and in locations in Mexico City. Droplet is working to produce many more that will be a fraction of the cost to users.

"We're pleased to have entered into the licensing agreement," John Lovett, CEO of Droplet said. "Pat is a leading scientist in applying photo-acoustic technology to aerosols and has partnered with DMT on developing research-grade scientific instruments for air quality assessment.

"Our new instrument, the Photoacoustic Extinctiometer —PAX, is a next generation monitoring tool to help scientists and air quality engineers accurately assess the optical properties of aerosols that are relevant for climate change and visibility. By measuring the aerosol in its natural state (photoacoustically), without requiring filter collection, the PAX improves measurement accuracy over older competing technologies."

Arnott and Arnold, an undergraduate student in Physics at the University when he assisted Arnott with instrument development, are also working on developing a truly miniature device that may find use as an on-board sensor for real-time black carbon air pollution emission control.

The University of Nevada, Reno's Tech Transfer Office develops license agreements with business and industry for technologies produced and patented at the University. They have more than 30 technologies available for licensing in a variety of commercialization categories including renewable energy, life sciences, physical sciences, environmental sciences and the medical field.