In a paper to be published in the April 10, 2011, issue of The Astrophysical Journal, scientists on NASA's Interstellar Boundary Explorer (IBEX) mission, including lead author Nathan Schwadron and others from the University of New Hampshire, isolate and resolve the mysterious "ribbon" of energy and particles the spacecraft discovered in the heliosphere – the huge bubble that surrounds our solar system and protects us from galactic cosmic rays.

The finding, which overturns 40 years of theory, provides insight into the fundamental structure of the heliosphere, which in turn helps scientists understand similar structures or "astrospheres" that surround other star systems throughout the cosmos.

The heliosphere is a bubble in space "blown" into the interstellar medium (the hydrogen and helium gas that permeates the galaxy) by the solar wind. Although electrically neutral atoms from interstellar volume can penetrate this bubble, virtually all of the material in the heliosphere emanates from the Sun itself. It was thought for decades that it extends in a long comet-like tail, but in 2009 data from the Cassini and IBEX show a different shape.


A diagram showing the outer extent of the heliosphere, the Oort cloud, and out to Alpha Centauri on a logarithmic scale to one million AU. 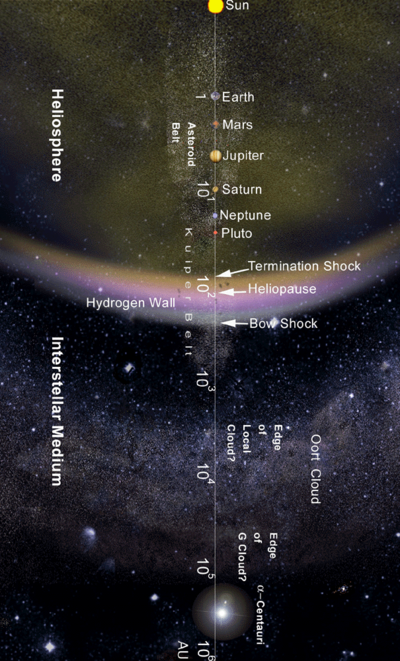 The ribbon of energy was captured using ultra-high sensitive cameras that image energetic neutral atoms (instead of photons of light) to create maps of the boundary region between our solar system and the rest of our galaxy.

Notes Schwadron, an associate professor at UNH's Institute for the Study of Earth, Oceans, and Space and department of physics, "Isolating and separating the ribbon from the IBEX maps was like pulling the drapes from our window to discover the landscape at the edge of the solar system."

Of the singular images the IBEX mission has been able to achieve, lead scientist David McComas of the Southwest Research Institute (SwRI) says, "These maps are very rich scientifically and are critical in helping scientists understand how our space environment is controlled by the galactic medium. They provide the first images of our solar system's boundaries, which control the access to potentially harmful galactic cosmic rays as well as all other matter from deep space."

The most energetic galactic cosmic rays penetrate even the powerful magnetic fields closest to Earth and eventually collide and interact with Earth's atmosphere. The direct or indirect effects of these cosmic rays on the Earth system, including our biosphere, remain poorly understood and are often highly controversial.

The IBEX team is using the maps to learn how the heliosphere is shaped and what its physical properties are. This detailed information about our solar system's boundaries will allow scientists to better understand how galactic cosmic rays evolve in our space environment, which in turn will provide fundamental information about the radiation environment on Earth and its implications on the evolution of life.

The IBEX scientists analyzed data from the mission's first year of observations and, after developing an effective separation method, were able to isolate and resolve the unanticipated energetic ribbon feature. The ribbon appears to be wrapped like a belt on top of the globally distributed emissions of the broader sky, and by separating it from the background emissions scientists can now see what's underneath the ribbon.

Says Schwadron, "There are many theories about how the ribbon is created, and we don't understand exactly what we're seeing but it seems to be telling us something about how the local galactic magnetic field interacts with the heliosphere."

Additional evidence for that interaction was the discovery of a "tail" of emissions in the underlying boundary landscape, which is apparently deflected in the direction of the galactic magnetic field as the ribbon seems to indicate.

"This galactic magnetic field may be a missing key to understanding how the heliosphere protects the solar system from galactic cosmic rays," says Schwadron.

Also seen in the maps is the expected feature of the "nose" of the heliosphere. The nose represents the direction in which the solar system moves through the local part of the galaxy nearest to our Sun and that Schwadron compares to the "bow wave in front of a ship, which shows us how our motion through the galaxy compresses and deflects the material of the local galactic medium around our heliosphere."

The IBEX maps differ so radically from what was expected prior to the mission that the scientists have been struggling to untangle the vast amount of information the maps contain. The team notes that getting emissions from the nose of the heliosphere has been an important "lamp post" towards understanding how the global heliosphere is controlled by the interaction of the Sun with the local galactic medium.

Says McComas, "Prior to IBEX, most scientists believed that the global boundaries of our solar system were controlled mainly by the motion of our solar system through the galaxy and the solar wind, an extremely fast flow of electrically charged matter that flows out from the Sun. The IBEX maps reveal the galactic magnetic field is also a critical part of the Sun's interaction with the galaxy."

An online version of the article in The Astrophysical Journal can be viewed at http://iopscience.iop.org/0004-637X/731/1/56. UNH co-authors include Eberhard Möbius, professor of physics, and Harald Kucharek, research associate professor in the Space Science Center in UNH's Institute for the Study of Earth, Oceans and Space.

Rather than a comet-like shape, the heliosphere appears to be bubble-shaped according to data from Cassini's Ion and Neutral Camera (MIMI / INCA). Rather than being dominated by the collisions between the solar wind and the interstellar medium, the INCA (ENA) maps suggest that the interaction is controlled more by particle pressure and magnetic field energy density.