An elaborate labyrinth of sacred tunnels, containing the mummified remains of millions of dogs, has been excavated under the Egyptian desert.

The Catacombs of Anubis project, led by Paul Nicholson of the School of History, Archaeology and Religion, is examining a labyrinth of tunnels beneath the desert at Saqqara in Egypt. The tunnels make up the catacomb for the burial of animals sacred to the dog or jackal-headed god Anubis. The catacombs date to 747-730 B.C.

The Dog Catacombs, as they are called are dedicated to the Egyptians' jackal-headed god of the dead, Anubis They were first documented in the 19th century although they were never fully excavated. 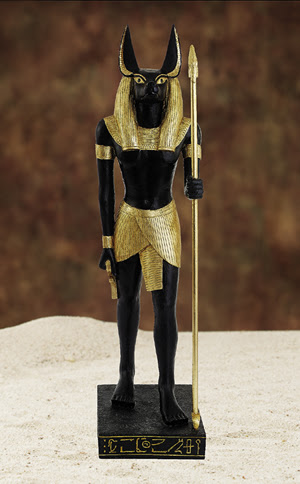 Dog remains in the Catacombs of Anubis uncovered beneath the Egyptian desert.

The Dog Catacomb has been known since the 19th Century but has never been properly excavated before. The excavation team’s latest estimate is that some 8,000,000 animals – most of them dogs or jackals - were buried there. Work on the animal bones suggests that they were only hours or days old when they were killed and mummified. It is likely the dogs were bred in their thousands in special puppy farms around the ancient Egyptian capital of Memphis.

Dr Nicholson said: "Our findings indicate a rather different view of the relationship between people and the animals they worshipped than that normally associated with the ancient Egyptians, since many animals were killed and mummified when only a matter of hours or days old. These animals were not strictly ‘sacrificial’. Rather, the dedication of an animal mummy was regarded as a pious act, with the animal acting as intermediary between the donor and the gods."


Dr Steve Mills investigates a chamber within the catacomb.

The project has just won the Andante Travels Archaeological Award for 2011 for a work which has both archaeological significance and public appeal. Andante Travels is a British company specialising in archaeological tourism and the £2000 award will support further work, including radiocarbon dating of the construction phases of the catacomb.
Researchers estimate the catacombs contain the remains of 8 million animals. According to the researchers, the large numbers of animals, indicate they were bred by the thousands in puppy farms around the ancient Egyptian capital of Memphis. The Dog Catacombs are located at Saqqara, the burial ground for the ancient capital Memphis.

The team is hoping that the geological work on the catacomb will help the Egyptian Ministry of Antiquities, who have generously permitted the work, in monitoring the site for its long term preservation.

The work has been funded in part by the School of History, Archaeology and Religion and by National Geographic
Source: Cardiff University
on March 31, 2011