NASA's Kepler Mission is giving astronomers such a clear view of changes in star brightness that they can now see clues about what's happening inside red giant stars.

"No one anticipated seeing this before the mission launched," said Steve Kawaler, an Iowa State University professor of physics and astronomy and a leader of the Kepler Asteroseismic Investigation. "That we could see so clearly down below a red giant star's surface was unexpected."

This image zooms in on a small portion of the Kepler spacecraft's field of view. It shows hundreds of stars in the constellation Lyra. Brighter stars appear white and fainter stars appear red. 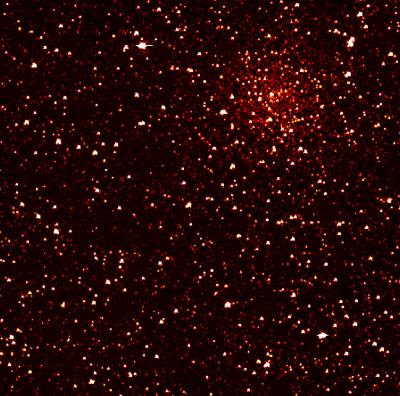 The astronomers' preliminary findings are published in two papers:

"Kepler Detected Gravity-Mode Period Spacings in a Red Giant Star," published online March 17 in the Brevia section of the journal Science. The paper's principal author is Paul Beck of Leuven University in Belgium.

"Gravity Modes as a way to Distinguish between Hydrogen- and Helium-burning Red Giant Stars," published in the Letters section of the March 31 edition of Nature. The paper's principal author is Timothy Bedding of the University of Sydney in Australia.

Both papers describe how Kepler tracks tiny, regular changes in star brightness. Their regularity resembles steady drumbeats at different, precise rhythms. Each rhythm can be thought of as an individual tooth of a comb. Astronomers have studied those oscillations from ground-based telescopes to determine star basics such as mass and radius. But they noticed departures from the steady patterns in the Kepler data – "dandruff on the comb," Kawaler said.

These other patterns are caused by gravity mode oscillations. And those waves are allowing researchers to probe a star's core. The result, according to the Science paper, is information about the density and chemistry deep inside a star.

And, according to the Nature paper, the data also shows researchers whether a red giant star burns hydrogen in a shell surrounding the star or whether it has evolved to an age that it burns helium in the core. That's something astronomers hadn't been able to determine before Kepler.

"The stars burning helium in the core survived a helium flash," Kawaler said. "That transformation from stars burning a hydrogen shell is mysterious. We think it happens quickly and perhaps explosively. Now we can tell which stars have done that and which stars will do that."

That information will help astronomers better understand the life cycle of red giant stars. Our sun will evolve into a red giant in about 5 billion years.

Kepler launched March 6, 2009, from Florida's Cape Canaveral Air Force Station. The spacecraft is orbiting the sun carrying a photometer, or light meter, to measure changes in star brightness. The photometer includes a telescope 37 inches in diameter connected to a 95 megapixel CCD camera. That instrument is continually pointed at the Cygnus-Lyra region of the Milky Way galaxy. Its primary job is to use tiny variations in the brightness of the stars within its view to find earth-like planets that might be able to support life.

The Kepler Asteroseismic Investigation is also using data from that photometer to study stars. The investigation is led by a four-member steering committee: Kawaler, Chair Ron Gilliland of the Space Telescope Science Institute based in Baltimore, Jorgen Christensen-Dalsgaard and Hans Kjeldsen, both of Aarhus University in Aarhus, Denmark.

"But you have to listen very carefully," Kawaler said. "And you have to have an instrument sensitive enough to see and hear both."