Finding confirms that serious diseases can pass to gorillas from people

For the first time, a virus that causes respiratory disease in humans has been linked to the deaths of wild mountain gorillas, reports a team of researchers in the United States and Africa.

A new study finding confirms that serious diseases can pass from people to these endangered animals.

The researchers are from the non-profit Mountain Gorilla Veterinary Project; the Wildlife Health Center at the University of California, Davis; the Center for Infection and Immunity at Columbia University; and the Rwanda Development Board. 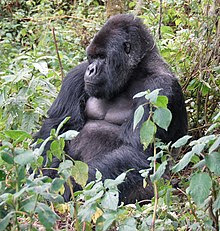 Their study, which reports the 2009 deaths of two mountain gorilla that were infected with a human virus, was published online today by the journal Emerging Infectious Diseases, a publication of the U.S. Centers for Disease Control and Prevention.

"Because there are fewer than 800 living mountain gorillas, each individual is critically important to the survival of their species," said Mike Cranfield, executive director of the Mountain Gorilla Veterinary Project and a UC Davis wildlife veterinarian. "But mountain gorillas are surrounded by people, and this discovery makes it clear that living in protected national parks is not a barrier to human diseases."

Humans and gorillas share approximately 98 percent of their DNA. This close genetic relatedness has led to concerns that gorillas may be susceptible to many of the infectious diseases that affect people.

The potential for disease transmission between humans and mountain gorillas (Gorilla beringei beringei) is of particular concern because over the past 100 years, mountain gorillas have come into increasing contact with humans. In fact, the national parks where the gorillas are protected in Rwanda, Uganda and the Democratic Republic of Congo are surrounded by the densest human populations in continental Africa.

Also, gorilla tourism -- while helping the gorillas survive by funding the national parks that shelter them -- brings thousands of people from local communities and around the world into contact with mountain gorillas annually.

The veterinarians of the Mountain Gorilla Veterinary Project, who monitor the health of the gorillas and treat individuals suffering from life-threatening or human-caused trauma and disease, have observed an increase in the frequency and severity of respiratory disease outbreaks in the mountain gorilla population in recent years.

Infectious disease is the second most common cause of death in mountain gorillas (traumatic injury is the first). "The type of infection we see most frequently is respiratory, which can range from mild colds to severe pneumonia," said co-author Linda Lowenstine, a veterinary pathologist with the UC Davis Mountain Gorilla One Health Program who has studied gorilla diseases for more than 25 years.

The two gorillas described in the new study were members of the Hirwa group living in Rwanda. In 2008 and 2009, this group experienced outbreaks of respiratory disease, with various amounts of coughing, eye and nose discharge, and lethargy. In the 2009 outbreak, the Hirwa group consisted of 12 animals: one adult male, six adult females, three juveniles and two infants. All but one were sick. Two died: an adult female and a newborn infant.

Tissue analyses showed the biochemical signature of an RNA virus called human metapneumovirus (HMPV) infecting both animals that had died. While the adult female gorilla ultimately died as a result of a secondary bacterial pneumonia infection, HMPV infection likely predisposed her to pneumonia. HMPV was also found in the infant gorilla, which was born to a female gorilla that showed symptoms of respiratory disease.

###
The study's UC Davis authors are Cranfield, Lowenstine and Kirsten Gilardi, co-director of the UC Davis Wildlife Health Center's Mountain Gorilla One Health Program. The lead author is Gustavo Palacios, a virologist at the Center for Infection and Immunity at Columbia University in New York. Other authors are from the Mountain Gorilla Veterinary Project, Columbia University and the Rwanda Development Board.

The research was supported by Google.org; the U.S. National Institutes of Health; the Emerging Pandemic Threats PREDICT program of the U.S. Agency for International Development; and a grant from the David and Lucile Packard Foundation.

The study appeared today in the on-line version of the journal's April print edition.

About the Mountain Gorilla Veterinary Project

The Mountain Gorilla Veterinary Project, a U.S.-based non-profit organization, is dedicated to saving mountain gorilla lives. With so few animals left in the world today, the organization believes it is critical to ensure the health and well being of every individual possible. The organization's international team of veterinarians, the Gorilla Doctors, is the only group providing wild mountain gorillas with direct, hands-on care. The Mountain Gorilla Veterinary Project partners with the UC Davis Wildlife Health Center to advance "one-health" strategies for mountain gorilla conservation. www.gorilladoctors.org.

The UC Davis Wildlife Health Center, home of the Mountain Gorilla One Health Program, a center of excellence within the School of Veterinary Medicine, is composed of 13 epidemiologists, disease ecologists and ecosystem health clinicians and their staff working at the cutting edge of pathogen emergence and disease tracking in ecosystems. It benefits from the expertise of 50 other participating UC Davis faculty members from many disciplines who are involved in the discovery and synthesis of information about emerging zoonotic diseases (those transmitted between people and animals) and ecosystem health. Its mission is to balance the needs of people, wildlife and the environment through research, education and service. http://www.vetmed.ucdavis.edu/whc