Fossilized bones discovered in Texas from a flying reptile that died 89 million years ago may be the earliest occurrence of the prehistoric creature known as Pteranodon. The unique specimen is first of its kind discovered as far south as Texas, where it flew over a vast ancient sea


Previously, Pteranodon bones have been found in Kansas, South Dakota and Wyoming in the Niobrara and Pierre geological formations. This likely Pteranodonspecimen is the first of its kind found in Texas, according to paleontologistTimothy S. Myers at Southern Methodist University in Dallas, who identified the reptile. The specimen was discovered north of Dallas by an amateur fossil hunter who found various bones belonging to the left wing.
Pteranodon was a type of pterosaur that lived about the same time as some dinosaurs, about 100 million to 65 million years ago. The only reptiles to dominate the ancient skies, pterosaurs had broad leathery wings and slim torsos.
Adult pterosaur, toothless variety with about a 12-foot wing span
The specimen identified by Myers is an adult pterosaur of the toothless variety and while larger than most birds, wasn't among the largest pterosaurs, Myers said, noting it had a wing span between 12 and 13 feet, or 3.6 to 4 meters. It was discovered in the Austin Group, a prominent rock unit in Texas that was deposited around 89 million years ago, early in the geological time period called the Late Cretaceous.
Pterosaurs, many of which survived on fish, lived at a time when a massive ancient sea cut across the central United States. The Western Interior Seaway was a shallow body of water that split North America in half from the Arctic Ocean to the Gulf of Mexico.


More than a thousand Pteranodon fossils have been unearthed from the middle part of the seaway.
No definitive Pteranodon specimens have emerged from the southern part that is now Texas.
The SMU specimen, if it is Pteranodon, would be the first discovered so far south in the Western Interior Seaway, said Myers, a postdoctoral researcher in SMU'sHuffington Department of Earth Sciences.
Myers reported and described the specimen in "Earliest Occurrence of the Pteranodontidae (Archosauria: Pterosauria) in North America; New Material from the Austin Group of Texas" in the Journal of Paleontology.
Discovered along with the humerus were parts of the elongated fourth finger that in pterosaurs forms the wing. The SMU specimen's metacarpal — at 20 centimeters — is incomplete, missing an estimated 37 percent of its length.
The fossils do not solve the mystery of the reptile's cause of death, Myers said. But it appears the animal probably died in flight over the sea and then fell into the water. Its carcass probably floated for some time, so that when the flesh decomposed the bones separated at the joints, known as "disarticulation," before they settled to the sea floor and were buried.
"We know it was disarticulated when it was buried because the bones weren't preserved in correct anatomical position," Myers said. "Abrupt truncation of the broken end of one of the bones and infilling of the break with sediment also indicates that the breakage and disarticulation took place prior to burial."
Fossilized bones discovered in Texas are from the left wing of an ancient flying reptile that died 89 million years ago, possibly the earliest occurrence of the prehistoric creature Pteranodon, says SMU paleontologist Timothy S. Myers, who identified the fossils. 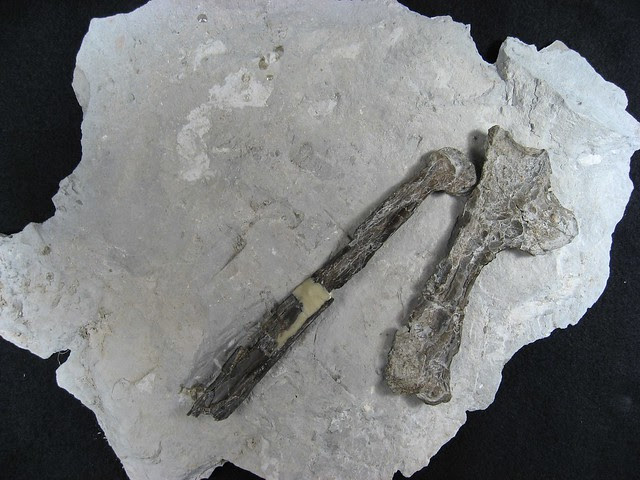 May be oldest Pteranodon in world
If the specimen represents Pteranodon, Myers said, it would be the oldest one in North America by 1 million to 2 million years, and the second oldest pteranodontid in the world.
Pterosaurs were alive from the Late Triassic — more than 200 million years ago — to the Late Cretaceous, evolving from small-bodied creatures to some of the largest animals to ever inhabit the skies, Myers said. An older pteranodontid specimen, belonging to the genusOrnithostoma, previously was identified in England.
"Any pterosaur material is fairly rare to find unless you have exceptional preservation conditions. They are frail, fragile bones, and they require rapid burial to be well preserved," Myers said. "The SMU specimen was deposited relatively far offshore in deep water, perhaps 50 to 80 feet deep. It's fairly exceptional because of the number of elements. Typically you'll only find one piece, or one part of a piece in the local rock."
During the Early Cretaceous, many types of pterosaurs lived around the world, Myers said. The earliest ones had thin, razor-sharp teeth. In the transition from Early to Late Cretaceous, the toothed variety disappear from the fossil record and toothless forms, like the SMU specimen, become more common, he said.
Dallas area specimens illustrate pterosaur evolution
North Texas is fortunate to have had both the toothed and toothless kinds discovered in the area, illustrating the evolutionary transition, noted Myers.
Besides the toothless specimen just identified by Myers, an older toothed pterosaur,Aetodactylus halli, previously was discovered in the Dallas area. Aetodactylus, also identified by Myers, lived 95 million years ago.
"This new specimen adds a lot more information about pterosaurs in North America," Myers said. "It helps constrain the timing of the transition from toothed to toothless because there's only a few million years separating this specimen and Aetodactylus."
Amateur fossil collector Gary Byrd of Rockwall, Texas, discovered the new SMU pterosaur fossils about 10 years ago.
A roofing contractor who keeps an eye out for fossils, Byrd made the find after stopping to look at two freshly excavated culverts while driving through a new subdivision in Collin County. Using a hammer and pick he dug out the bones and brought them to SMU paleontologists Louis Jacobs and Dale Winkler. Jacobs and Winkler indicated the fossils were likely a pterosaur. Byrd donated the fossils to SMU's Shuler Museum of Paleontology.
"I found a couple parts of a fish, and then when I saw these my initial thought was that they weren't fish," Byrd recalled. "I kind of knew it was something different — a birdlike thing. It's very rare you find those thin, long bones."
This isn't the first time Byrd has hit it lucky finding fossils. In 1994 he discovered dinosaur bones that he donated to SMU's Shuler Museum. The specimen was identified as a rare primitive duck-billed dinosaur and named Protohadros byrdi after Byrd.
Contacts and sources:
Margaret Allen
Southern Methodist University
on March 01, 2011