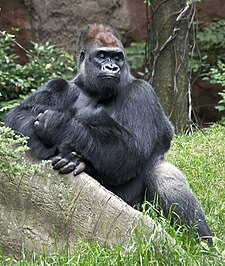 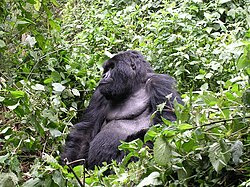 An evolutionary model of the two subspecies of Western gorillas was generated using microsatellite genotyping of living gorillas and 100 year old museum specimens. This data showed that, although Cross River gorillas diverged from Western lowland gorillas about 17,800 years ago, the two subspecies continued to intermittently interbreed. Drs Thalmann and Wegmann suggest that climate change during the Pleistocene era caused the forests to expand, permitting the Western gorillas to expand their range. When the forest contracted again the gorillas were separated into two populations which began to diverge. Successive rounds of climate change resulted in periods when the two subspecies could interbreed followed by repeated episodes of isolation of the Cross River population.

The model indicates that gene flow finally stopped between the two subspecies approximately 420 years ago. Over the last 320 years ago there has been a 60% decrease in the numbers of Cross River gorillas causing a loss of genetic diversity within the population. Dr Thalmann said, "The number of Cross River gorillas has continued to decrease, probably due to anthropogenic pressure, such as destruction of their habitat or hunting by humans. There are thought to be fewer than 300 individuals left."

He continued "It is unclear what effect this loss of genetic diversity will have on the long term viability of Cross River gorillas. But, given that this bottleneck occurred so recently, it is possible that if the population was allowed to expand the loss of diversity could be stopped."