Philadelphia Phillies, St. Louis Cardinals and San Francisco Giants should win their divisions, while the Atlanta Braves will take the wild card slot in the National League (NL), according to NJIT's baseball guru Bruce Bukiet. For over a decade, Bukiet, an associate professor and associate dean, has applied mathematical analysis to compute winning games for each Major League Baseball Team.
Baseball Diamond at Wrigley Field in Chicago 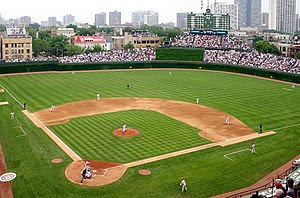 Credit: Wikipedia
This year, he said that in the American League (AL), the New York Yankees and Boston Red Sox should tie for first place in the East, with both making the playoffs, while the Detroit Tigers will edge out the Minnesota Twins in the Central Division and the Texas Rangers will repeat as winners in the West. His predictions aim to promote the power of math. He wants young people to see how math can be fun, how it can clarify issues and how it might make a great college major.
Bukiet bases his predictions on a mathematical model he developed in 2000. Last year he updated his formula, leading to better results.. BaseballPhD.net named him Predictions Champ in 2010.
In the NL East, the race for first place should be tight with the Phillies repeating as division champions, winning 92 games and the Braves just two games behind at 90, with both teams making the playoffs. In the Central Division, the St. Louis Cardinals appear poised to tie the Phillies for the best record in the NL, beating the Cincinnati Reds, the 2010 Central Division winners by 6 games. In the West, the World Series winners, the San Francisco Giants, should repeat as champs with 89 wins, with the Colorado Rockies and Los Angeles Dodgers just 2 and 3 games back, respectively.
The Yankees and Red Sox, both with 97 wins, the best in baseball, should dominate the AL East, finishing well ahead of their competition, with both teams making the playoffs. In the Central Division, it looks like the Detroit Tigers with 92 wins should just squeak past last year's division winners, the Minnesota Twins (91 wins). The 2010 AL Champion Texas Rangers should finish well ahead of their competitors in the AL West, winning 95 games, to the Oakland A's 87.
Bukiet's favorite team, the New York Mets, should take 4th place in its 5-team division, as it did last year, winning 79 games. Pittsburgh Pirates should repeat as the worst NL team with 63 wins, but the Houston Astros should give them a run for their money by winning just 64. This should be the 19th consecutive year for the Pirates to finish below .500. In the AL, the Kansas City Royals can expect to win 55 games and the distinction of being the only major league team to lose over 100 games in 2011.
Expected wins: AL East: Red Sox – 97; Yankees – 97; Rays – 83; Orioles – 78; Blue Jays – 71. AL Central: Tigers – 92; Twins – 91; White Sox – 88; Indians - 62; Royals – 55. AL West: Rangers – 95; A's – 87; Mariners – 72; Angels – 71. NL East: Phillies – 92; Braves – 90; Marlins – 81; Mets – 79; Nationals – 72; NL Central: Cards – 92; Reds – 86; Brewers – 83; Cubs – 78; Astros – 64; Pirates – 63. NL West: Giants – 89; Rockies – 87; Dodgers – 86; Padres – 79; Diamondbacks – 70.
Contacts and sources:
Contacts and sources:
Sheryl Weinstein
New Jersey Institute of Technology
on March 31, 2011