In an RV nicknamed after an urban assault vehicle, scientists from NASA's Langley Research Center traveled cross-country this month for an experiment with eco-friendly jet fuel.

The Langley team drove 2,600 miles (4,184 km) from Hampton, Va., to meet up with other researchers at NASA's Dryden Flight Research Center in California. 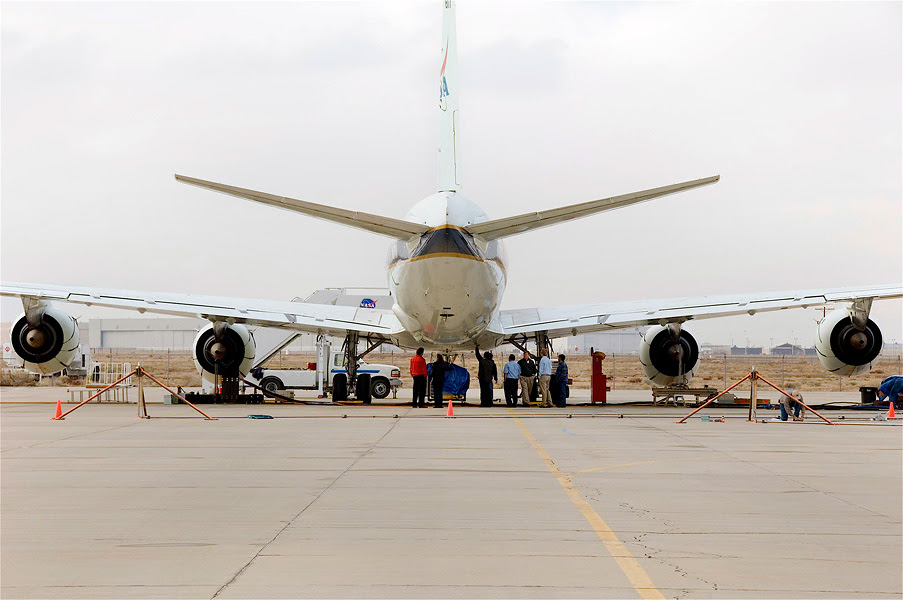 Researchers are testing the biofuel on a NASA DC-8 to measure its performance and emissions as part of the Alternative Aviation Fuel Experiment II, or AAFEX II. The fuel is called Hydrotreated Renewable Jet Fuel.

"It's made out of chicken fat, actually," said Langley's Bruce Anderson, AAFEX II project scientist. "The Air Force bought many thousands of gallons of this to burn in some of their jets and provided about 8,000 gallons (30,283 liters) to NASA for this experiment."

Anderson and his team will test a 50-50 mix of biofuel and regular jet fuel, biofuel only, and jet fuel only. The jet fuel is Jet Propellant 8, or JP-8, a kerosene-like mix of hydrocarbons. 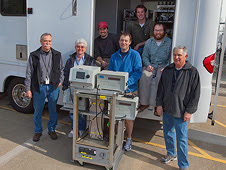 Two of the team members headed west in a specially equipped 32-foot (9.75 m) van on loan from Langley's Aviation Safety Program. It's dubbed "EM-50" by researchers after the urban assault vehicle used in the 1981 comedy "Stripes" with Bill Murray.

Collaborative Effort
Three more researchers from Langley flew to the experiment, and researchers from Dryden and NASA's Glenn Research Center in Ohio have key roles as well. The effort includes investigators and consultants from private industry, other federal organizations, and academia. In all, 17 organizations are participating in AAFEX II.

"This is going to be a lot of hard work," said Anderson.

Glenn researchers shipped instruments that will be used to measure particulate and gaseous emissions.

"AAFEX II will provide essential gaseous and particulate emissions data as well as engine and aircraft systems performance data from operation of the DC-8 on a fuel produced from a renewable resource," said Glenn's Dan Bulzan, who leads clean energy and emissions research in NASA's Subsonic Fixed Wing Project.

In 2009, researchers in the AAFEX I project tested two synthetic fuels derived from petroleum-based coal and natural gas.

Testing is being done at a time when the U.S. military has set a goal of eventually flying its aircraft using 50 percent biofuel. The Air Force is currently engaged in certifying its fleet to operate on a 50-percent blend of the same fuel being tested in AAFEX II. Some military cargo and fighter planes already use alternative fuels.

"The use of alternative fuels, including biofuels, in aircraft is a key element for substantially reducing the impact of aviation on the environment and for reducing the dependency on foreign petroleum," said Glenn's Ruben Del Rosario, manager of NASA's Subsonic Fixed Wing Project, which is conducting the tests.

The tests are funded and managed by the Fundamental Aeronautics Program of NASA's Aeronautics Research Mission Directorate in Washington.