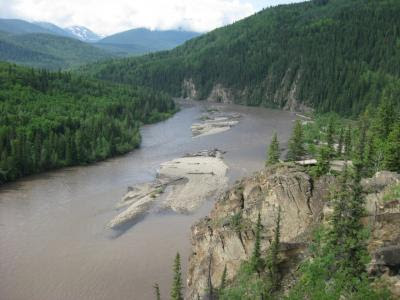 Canadians have always seen themselves as separate and distinct from their American neighbours to the south, and now they have geological proof.

New research published in April's edition of Geology shows that rock formations roughly along the same political boundary as the two North American countries formed as early as 120 million years ago.

Dr. Andrew Leier, of the Department of Geoscience at the University of Calgary, set out to prove what he thought was the obvious: because the mountains are continuous between the U.S. and Canada, the ancient river systems that flowed from these uplands were likely interconnected. In other words, during Cretaceous Period,120 million years ago, rivers should have flowed north and south between the countries, paying no mind to the modern day political border.

"I thought that I could easily show that in my research," says Leier who published a paper in Geology with co-author Dr. George Gehrels at the University of Arizona and, Leier adds, a lot of help from Cassandra Frosini, an undergraduate in geoscience at the University of Calgary.

But Leier was wrong. "I was surprised to learn the opposite, in fact, was true," he says.

Dr. Andrew Leier researched the origin of individual sand grains that were deposited during the Cretaceous Period in western North America.

A tiny piece of sediment found in sandstone called zircon helped the researchers locate where the sediments had originally formed. Knowing its current location, Leier was able to determine just how far the rivers moved it and the direction from which it came.

During the Cretaceous Period, mountains were being created all along western North America, in both Canada and the United States.

"I thought the sediment transported by ancient rivers in Montana and Utah would flow out of the mountain ranges and then north into Alberta. This is similar with how the Ganges River runs parallel to the Himalayas. Our research shows this wasn't the case," says Leier.

Leier and Gehrels used recently developed laser-based techniques to reconstruct the origin of individual sand grains that were deposited during this period in western North America. This technique has applications to the petroleum industry as well, where it can be used to aide in determining drilling locations.

"Cretaceous sediment in the United States have a clear American signature; whereas those in the Canadian Rockies have a different and definable Canadian signature," says Leier.

"The demarcation is pretty much coincidental with the modern day border."

"In other words, there is no evidence that rivers in western North America were crossing what is today the border," says Leier.

Contacts and sources:
Leanne Yohemas
University of Calgary
on March 28, 2011