Superlenses earned their superlative by being able to capture the "evanescent" light waves that blossom close to an illuminated surface and never travel far enough to be "seen" by a conventional lens. Superlenses hold enormous potential in a range of applications, depending upon the form of light they capture, but their use has been limited because most have been made from elaborate artificial constructs known as metamaterials.

The unique optical properties of metamaterials, which include the ability to bend light backwards - a property known as negative refraction - arise from their structure rather than their chemical composition. However, metamaterials can be difficult to fabricate and tend to absorb a relatively high percentage of photons that would otherwise be available for imaging. 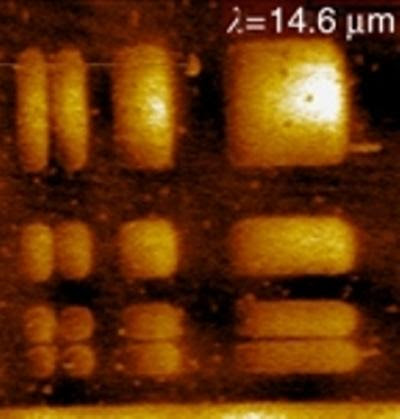 Now, researchers with the U.S. Department of Energy (DOE)'s Lawrence Berkeley National Laboratory (Berkeley Lab) have fabricated a superlens from perovskite oxides that are simpler and easier to fabricate than metamaterials, and are ideal for capturing light in the mid-infrared range, which opens the door to highly sensitive biomedical detection and imaging. It is also possible that the superlensing effect can be selectively turned on/off, which would open the door to highly dense data writing and storage.

"We have demonstrated a superlens for electric evanescent fields with low absorption losses using perovskites in the mid-infrared regime," says Ramamoorthy Ramesh, a materials scientist with Berkeley Lab's Materials Sciences Division, who led this research. "Spectral studies of the lateral and vertical distributions of evanescent waves around the image plane of our lens show that we have achieved an imaging resolution of one micrometer, about one-fourteenth of the working wavelength."

Ramesh, who also holds appointments with the University of California Berkeley's Department of Materials Science and Engineering and the Department of Physics, is the senior author of a paper in the journal Nature Communications titled "Near-field examination of perovskite-based superlenses and superlens-enhanced probe-object coupling."

Conventional lenses create images by capturing the propagating light waves emitted by an object under illumination and then bending these captured light waves into focus. No matter how perfect a conventional lens is, the smallest image it can ever resolve is about half the wavelength of the illuminating (incident) light - a restriction known as the "diffraction limit." Superlenses overcome the diffraction limit by capturing the evanescent light waves, which carry detailed information about features on an object that are significantly smaller than the wavelengths of incident light. Because evanescent waves dissipate or "vanish" after traveling a very short distance, conventional lenses seldom ever see them.

"A superlens made out of a metamaterial focuses propagating waves and reconstructs evanescent waves arising from the illuminated objects in the same plane to produce an image with sub-wavelength resolution," says Susanne Kehr, a former member of Ramesh's Berkeley research group and now with the University of Saint Andrews in the United Kingdom. "Our perovskite-based superlens doesn't focus propagating waves, but instead reconstructs evanescent fields only. These fields generate the sub-wavelength images that we study with near-field infrared microscopy."

Kehr is one of two leading authors of the Nature Communications paper, along with Yongmin Liu, a metamaterials expert in the research group of Xiang Zhang, who also worked on this study. In 2005, Zhang, who holds joint appointments with Berkeley Lab and the University of California, Berkeley, led the first experimental demonstration of a superlens at optical frequencies.

Kehr and Liu say that perovskites hold a number of advantages over metamaterials for superlensing. The perovskites they used to make their superlens, bismuth ferrite and strontium titan¬ate, feature a low rate of photon absorption and can be grown as epitaxial multilayers whose highly crystalline quality reduces interface roughness so there are few photons lost to scattering. This combination of low absorption and scattering losses significantly improves the imaging resolution of the superlens.

"In addition, perovskites display a wide range of fascinating properties, such as ferroelectricity and piezoelectricity, superconductivity and enormous magnetoresistance that might inspire new functionalities of perovskite-based superlenses, such as non-volatile memory, microsensors and microactu¬ators, as well as applications in nanoelectronics," says Liu. "Bismuth ferrite, in particular, is multiferroic, meaning it simultaneously displays both ferroelectric and ferromagnetic properties, and therefore is a good candidate to allow for electric and magnetic tunability."

This research represents the first application of perovskite materials to superlensing. One of the biggest challenges was to find the right combination of perovskites that would make an effective superlens. The perovskite thin films they fabricated were grown by pulsed-laser deposition and found to be single phase and fully epitaxial. However, this too was a challenge, as Kehr explains.

"Our superlenses consisted of a layer of bismuth ferrite and a layer of strontium titan¬ate with thicknesses of 200 and 400 nanometers, respectively, which is rather thick for epitaxial growth with pulsed laser deposition," she says. "At these thicknesses, accurate thickness and flat interfaces become a problem."

A combination of near-field infrared microscopy with a tunable free-electron laser provided a first of its kind highly detailed study of the spatial and spectral near-field responses of the superlens. This study led to the observation of an enhanced coupling between the illuminated objects – rectangles of strontium ruthenate on a strontium titanate substrate - and a near-field scattering probe - a metal-coated atomic-force microscope tip with a typical radius of 50 nanometers.

"At certain distances between the probe and the surface of the object, we observed a maximum number of evanescent fields," Ramesh says. "Comparisons with numerical simulations indicate that this maximum originates from an enhanced coupling between probe and object, which might be applicable for multifunctional circuits, infrared spectroscopy and thermal sensors."

In their Nature Communications paper, Ramesh and his co-authors say that the multiferroic bismuth ferrite layer should make their superlens tunable through the application of an external electric field. This tunability could be used to change the superlensing wavelength or sharpen the final image, but even more importantly, might be used to turn the superlensing effect on and off.

"The ability to switch superlensing on and off for a certain wavelength with an external electric field would make it possible to activate and deactivate certain local areas of the lens," Kehr says. "This is the concept of data-storage, with writing by electric fields and optical read-outs."

Liu says that the mid-infrared spectral region at which their superlens functions is prized for biomedical applications.

"Most biomolecules have specific absorption and radiation features in this range that depend on their chemical composition and therefore yield a fingerprint in the spectra," he says. "However, compared with optical wavelengths, there are significant limitations in the basic components available today for biophotonic delivery in the mid-infrared. Our superlens has the potentials to eliminate these limitations."

The broad range of expertise represented by these co-authors was critical to the success of the research, as Kehr explains.

"Our perovskite oxide superlens was designed and grown in Ramesh's group, but the idea for a perovskite superlens originated with Lukas Eng at the University of Technology in Dresden," she says. "A collaboration at Dresden between Eng and Manfred Helm provided the expertise for combining near-field infrared microscopy and free-electron laser technologies, and Yongmin and Xiang Zhang provided the expertise in optics for interpreting our results."

Lawrence Berkeley National Laboratory is a U.S. Department of Energy (DOE) national laboratory managed by the University of California for the DOE Office of Science. Berkeley Lab provides solutions to the world's most urgent scientific challenges including sustainable energy, climate change, human health, and a better understanding of matter and force in the universe. It is a world leader in improving our lives through team science, advanced computing, and innovative technology. Visit our Website at www.lbl.gov