New research gives the first accurate estimate of how much faster the Earth's core is rotating compared to the rest of the planet.

The inner core of the Earth, its innermost hottest part as detected by seismological studies, is a primarily solid sphere about 1,216 km (760 mi) in radius, or about 70% that of the Moon. It is believed to consist of an iron-nickel alloy, and may have a temperature similar to the Sun's surface, approximately 5778 K (5505 °C).

Cutaway of the Earth 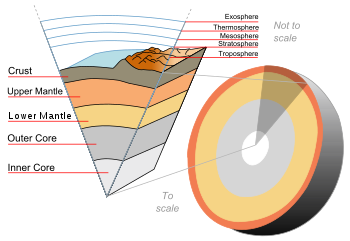 Previous research had shown that the Earth's core rotates faster than the rest of the planet. However, scientists from the University of Cambridge have discovered that earlier estimates of 1 degree every year were inaccurate and that the core is actually moving much slower than previously believed – approximately 1 degree every million years. Their findings are published today, Sunday 20 February, in the journal Nature Geoscience.

The inner core grows very slowly over time as material from the fluid outer core solidifies onto its surface. During this process, an east-west hemispherical difference in velocity is frozen into the structure of the inner core.

"The faster rotation rates are incompatible with the observed hemispheres in the inner core because it would not allow enough time for the differences to freeze into the structure," said Lauren Waszek, first author on the paper and a PhD student from the University of Cambridge's Department of Earth Sciences.

"This has previously been a major problem, as the two properties cannot coexist. However, we derived the rotation rates from the evolution of the hemispherical structure, and thus our study is the first in which the hemispheres and rotation are inherently compatible."

For the research, the scientists used seismic body waves which pass through the inner core - 5200km beneath the surface of the Earth - and compared their travel time to waves which reflect from the inner core surface. The difference between the travel times of these waves provided them with the velocity structure of the uppermost 90 km of the inner core.

Although the inner core is 5200km beneath our feet, the effect of its presence is especially important on the Earth's surface. In particular, as the inner core grows, the heat released during solidification drives convection in the fluid in the outer core. This convection generates the Earth's geomagnetic field. Without our magnetic field, the surface would not be protected from solar radiation, and life on Earth would not be able to exist.

"This result is the first observation of such a slow inner core rotation rate," said Waszek "It therefore provides a confirmed value which can now be used in simulations to model the convection of the Earth's fluid outer core, giving us additional insight into the evolution of our magnetic field."

Citation:
The paper 'Reconciling the hemispherical structure of Earth's inner core with its super-rotation' is scheduled for advanced online publication in Nature Geoscience on Sunday 20 February.