Researchers at North Carolina State University have developed a cheap and easy method for assembling nanowires, controlling their alignment and density. The researchers hope the findings will foster additional research into a range of device applications using nanowires, from nanoelectronics to nanosensors, especially on unconventional substrates such as rubber, plastic and paper. 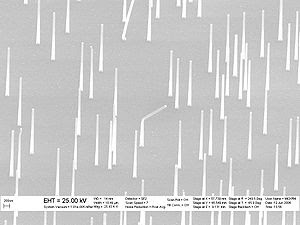 “Alignment is a critical first step for developing devices that use nanowires,” says Dr. Yong Zhu, an assistant professor of mechanical and aerospace engineering at NC State and co-author of a paper describing the research. “Hopefully our simple and cost-effective method will facilitate research in this field.”

Previous research has presented a number of other methods for assembling nanowires. But the new method offers a number of distinct advantages. “Our method is cost-effective,” says Feng Xu, a Ph.D. student working on this project, “because it is so simple. It can also be used for nanowires synthesized by different methods or processed in different conditions, for instance, silver nanowires synthesized in solution and silicon nanowires synthesized by the vapor-liquid-solid method, as demonstrated in our work.” In addition, the new method can be used in conjunction with previous methods to achieve even better nanowire assembly.

The use of a rubber substrate in this method facilitates broad research and manufacturing sectors. For example, a key element of research into stretchable nanoelectronics involves aligning nanowires on a stretchable rubber substrate. Similarly, rubber is also the material used as “stamps” in transfer printing – a critical fabrication method used in manufacturing nanodevices on diverse substrates ranging from silicon to glass to plastic.

Zhu notes that the initial step of the method, when the nanowires are first deposited on stretched rubber, sometimes yields an inconsistent degree of nanowire alignment. The team is currently working to understand the fundamental interface mechanics -including adhesion and static friction -between nanowires and rubber substrates, which is expected to lead to a better control of the assembly process and hence a higher yield of the nanowire assembly.

The paper, “Strain-Release Assembly of Nanowires on Stretchable Substrates,” was published Feb. 22 in ACS Nano. The paper was co-authored by Zhu, Xu, NC State Ph.D. student John Durham, and Dr. Benjamin Wiley, an assistant professor at Duke University. The research was funded by the National Science Foundation.

NC State’s Department of Mechanical and Aerospace Engineering is part of the university’s College of Engineering.

Abstract: A simple yet effective method for assembly of highly aligned nanowires (NWs) on stretchable substrates is reported. In this method, NWs were first transferred to a strained stretchable substrate. After the strain was released, the NWs aligned in the transverse direction and the area coverage of the NWs on the substrate increased. This method can be applied to any NWs deposited on a stretchable film and can be repeated multiple times to increase the alignment and density of the NWs. For silver (Ag) and silicon (Si) NWs on poly(dimethylsiloxane) (PDMS) substrates, the probability of NW alignment increased from 29% to 90% for Ag NWs, and from 25% to 88% for Si NWs after two assembly steps; the density increased by 60% and 75% for the Ag and Si NWs, respectively. The large-strain elasticity of the substrate and the static friction between the NWs and the substrate play key roles in this assembly method. We find that a model that takes into account the volume incompressibility of PDMS reliably predicts the degree of NW alignment and NW density. The utility of this assembly method was demonstrated by fabricating a strain sensor array composed of aligned Si NWs on a PDMS substrate, with a device yield of 95%.
on February 28, 2011