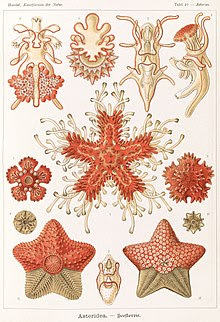 Defense
Starfish have arms, spines and a mouth on the underside of its body. But what scientists are finding really interesting is the sticky goo which is secreted when the Starfish feels threatened. The slime contains properties which may prove invaluable in treating certain kinds of inflammatory illnesses.

Dr Charlie Bavington is Managing Director of Glycomar, a marine biotechnology company based at the Scottish Association for Marine Science in Oban. With access to the slimy starfish, he is working with Clive Page, professor of pharmacology at King’s College London.

Non-stick
The project, he explains, came out of a chance encounter at a wedding. Scientists from different disciplines were chatting and the idea emerged of ‘taking the non-stick properties of starfish and trying to apply it in a medical situation, and asthma was the application’. Because Clive Page is a Respiratory Pharmacologist, they got funding. Dr Bavington got involved early on, having switched from marine biology to clinical biochemistry. ‘I was studying the same sort of molecules in starfish as I’d been studying in man, so it wasn’t a totally nonsensical connection.’ 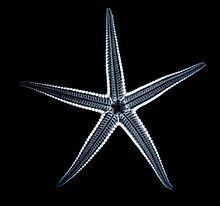 Inflammatory cells
Bavington left to work elsewhere but when he returned to the project it inspired him to set up a company which connects together the medical application with the marine source. ‘We looked at a wide range of applications not just of the slime but also of the actual skin surface. Obviously they are bathed not only in seawater, but in all sorts of bacteria, larvae and barnacles, looking for somewhere to live and settle. Starfish need to have an effective defence and part of that is a kind of non-stick property, including the slime.’ He explains that it is similar to where there ‘is inflammatory cells circulating around in the blood system and when there is inflammation they stick to the blood vessel wall.’ When the cells migrate into the blood vessel wall, into the tissue, they are responsible for the inflammation. If Dr Bavington, Professor Page and the other scientists can regulate the sticking and migrating process then they may have a new class of treatment.