A Secret Sense Turtles Have and You Don't Discovered

From the very first moments of life, hatchling loggerhead sea turtles have an arduous task. They must embark on a transoceanic migration, swimming from the Florida coast eastward to the North Atlantic and then gradually migrating over the course of several years before returning again to North American shores. Now, researchers reporting online on February 24 in Current Biology, a Cell Press publication, have figured out how the young turtles find their way. 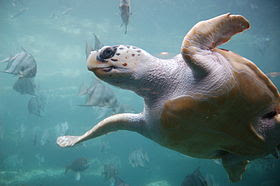 Lines of longitude appear vertical with varying curvature in this projection, but are actually halves of great ellipses, with identical radii at a given latitude. 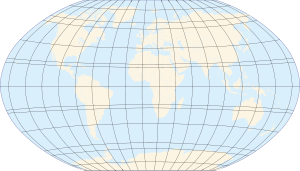 
"One of the great mysteries of animal behavior is how migratory animals can navigate in the open ocean, where there are no visual landmarks," said Kenneth Lohmann of the University of North Carolina at Chapel Hill.

"The most difficult part of open-sea navigation is determining longitude or east-west position. It took human navigators centuries to figure out how to determine longitude on their long-distance voyages," added Nathan Putman, a graduate student in Lohmann's lab and lead author of the study. "This study shows, for the first time, how an animal does this."

It appears that the turtles pick up on magnetic signatures that vary across the Earth's surface in order to determine their position in space—both east-west and north-south—and steer themselves in the right direction. Although several species, including sea turtles, were known to rely on magnetic cues as a surrogate for latitude, the findings come as a surprise because those signals had been considered unpromising for determining east-west position.

A model of the deviations in earth's magnetic field, measured by satellites with sensitive magnetometers 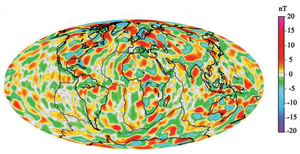 Near the Equator, the field lines are approximately parallel to the Earth's surface, Putman and Lohmann explained. As one travels north from the Equator, the field lines grow progressively steeper until they reach the poles, where they are directed straight down into the Earth. The magnetic field also varies in intensity, being generally strongest near the poles and weakest near the equator. Both parameters appear to vary more reliably from north to south than east to west, which had led many researchers to conclude that the magnetic field is useful only for latitudinal information.

"Although it is true that an animal capable of detecting only inclination or only intensity would have a hard time determining longitude, loggerhead sea turtles detect both magnetic parameters," Putman said. "This means that they can extract more information from the Earth's field than is initially apparent."

The researchers made the discovery by subjecting hatchlings to magnetic fields replicating those found at two locations, both along the migratory route but at opposite ends of the Atlantic Ocean. Each location had the same latitude but different longitude. The turtles were placed in a circular water-filled arena surrounded by a computerized coil system used to control the magnetic field and tethered to an electronic tracking unit that relayed their swimming direction.

The findings may have important implications for the turtles, the researchers say.

"This work not only solves a long-standing mystery of animal behavior but may also be useful in sea turtle conservation," Lohmann said. "Understanding the sensory cues that turtles rely on to guide their migrations is an important part of safeguarding their environment."

The discovery may also lead to new approaches in the development of navigational technologies, the researchers added.