Old Folk Remedy Revived: How Tansy May Be A Treatment For Herpes

For centuries tansy has been used as a folk remedy, but now scientists from Britain and Spain believe the plant may have medical benefits after all, as a treatment for herpes. The team's findings, published in Phytotherapy Research, are the result of joint work between two teams to established scientific evidence for traditional medicines. 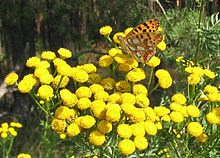 Tansy, Tanacetum vulgare, is a flowering plant found across mainland Europe and Asia. From the Middle Ages onwards the plant, whose folk names include Golden Buttons and Mugwort, has been used as a remedy for various conditions, from fevers to rheumatism. However, it's supposed medical benefits have always been questioned.

"Our research focused on the anti-viral properties of tansy, especially the potential treatment it may represent for herpes," said lead author Professor Francisco Parra from the Universidad de Oviedo. "We currently lack an effective vaccine for either HSV-1 or HSV-2 stands of the disease, which can cause long term infections."

Professor Parra's team which specialises in investigating new antiviral compounds, both through design or by screening natural plant extracts, began joint work on the properties of tansy with the research group led by Dr Solomon Habtemariam from the University of Greenwich, which studies European medicinal plants to establish the scientific evidence for traditional medicines.

Through a mechanistic-based antiherpetic activity study, the teams revealed which constituents of the plant are responsible for antiviral activity.

"Our study revealed that parthenolide is not one of the major anti HSV-1 principles of tansy, as has been suggested. However we found that tansy does contains known antiviral agents including 3,5-dicaffeoylquinic acid (3,5-DCQA) as well as axillarin, which contributes to its antiherpetic effect," said Parra. "This shows that multiple properties of the plant are responsible for the supposed antiviral activity of tansy."

The joint study used an established anti-HSV study model on both crude extracts of the aerial parts and roots of tansy, as well as some purified compounds to analyse the plants anti-viral activity.

"Although the precise molecular targets for tansy extract require further research this study reveals the clear potential of tansy to treat the dermatological lesions caused by HSV, concluded Parra. "This shows that systematic pharmacological and phytochemical studies such as this can play pivotal roles in the modernisation of European traditional herbal medicines."